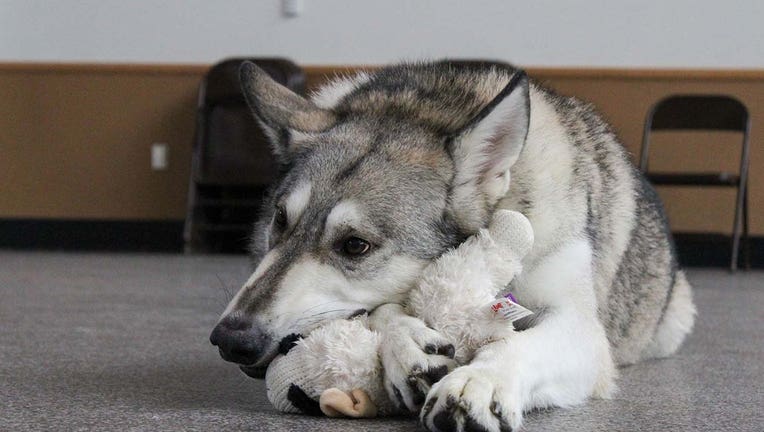 MIDDLETOWN, R.I. - It looks like an animal, who made national headlines for possibly being part wolf and part dog, has found a home.

The Potter League For Animals said "Zeus" will head to Vermont with his new owner, Ron.

"He is headed to his new home in Vermont with his new dad, Ron, and we could not be happier for them," the league said in a Facebook post.

The word is still out on his genetic makeup.

"And we promise once the DNA comes back, we will let you all know the results," the league added.

The animal recently came to the shelter in Rhode Island.

According to the league, the dog’s previous owner confirmed its breed.

"If you’re thinking that this majestic dog looks awfully like a wolf hybrid, well, you’re most likely correct. We believe Zeus to be 1/3 German Shepherd, 1/3 Husky, and 1/3 Wolf," Potter League Family, located in Middletown, shared on Jan. 6.

The shelter received a flood of applications for adoption.

"We are pleasantly surprised by the amount of people who have reached out and how far-reaching the post has gone," the league told FOX Television Stations. "I can safely say we have received dozens of applications but that doesn’t include the amount of messages, emails and calls which have been nonstop."

The league said Zeus is illegal to privately own in Rhode Island and in its surrounding states. They also noted the animal’s medical condition, which makes him prone to seizures that are managed by medication.

"Zeus is not your average dog next door," the league continued. "He is large at over 100lbs ... can easily scale a six-foot fence, so his ideal home and family would include experience owning a large breed dog or wolf hybrid experience and the ability to contain him safely."

Zeus has previously lived with other dogs, cats and children, and most of his life has been an indoor animal, which makes sanctuary placement unsuitable, the shelter explained.

Stephanie Weaver contributed to this story. This story was reported from Los Angeles.