LOS ANGELES - Political debates between major political candidates are an American tradition in the United States. While presidential debates continue to develop and evolve, their competitive spirit has not changed and continues to be a significant part of the presidential election process.

But where, and how, did political debates begin?

To start, it began with no moderator or panel

American presidential debates can be traced from a series of Illinois Senate race debates between Abraham Lincoln and Stephen Douglas in 1858, according to writers Josh Clark and Melanie Radzicki McManus of HowStuffWorks.

With no moderator or panel, Lincoln would follow Douglas on his campaign trail around the state, and Douglas would give his own remarks in that location. Then, Lincoln would do the same. 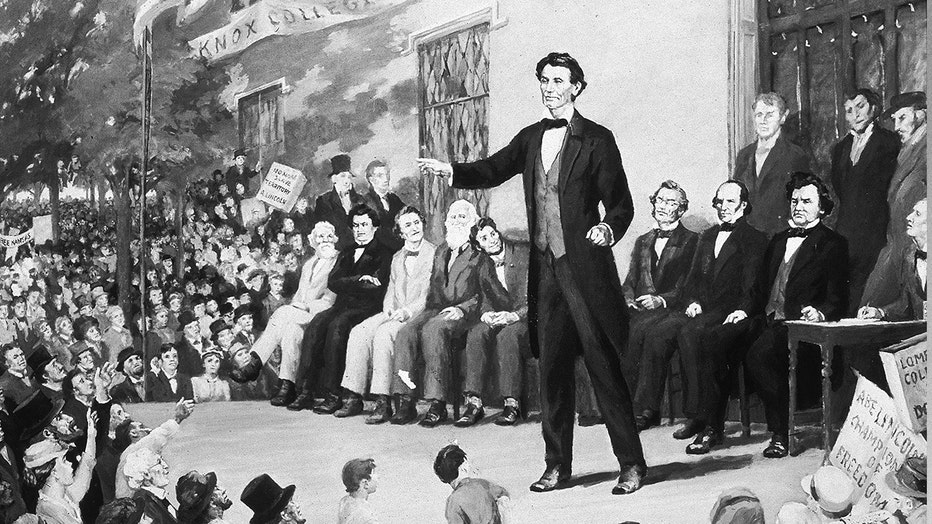 “Douglas eventually agreed to take the stage with Lincoln seven times for three hours each to debate the moral and economic quandaries posed by slavery,” Clark and McManus wrote.

These debates required the two candidates to speak at great length. “The first candidate spoke for one hour, followed by a one and one half hour rebuttal, and then a half hour closing by the opening speaker,” according to PBS.

The debates eventually became known as the Lincoln-Douglas Debates, and “provided the conceptual framework which brought about formal presidential debates in the modern era,” the Bill of Rights Institute said. “These debates helped establish the precedent that candidates should present their cases and state their criticisms before the public, and engage in a constructive dialogue with each other about the future course of the nation.”

According to Clack and McManus, 15 election cycles went by without much public argument between candidates. Dialogue to the public was primarily in the format of campaign speeches, not from debating.

RELATED: Election 2020: How to protect yourself at the polls amid COVID-19 pandemic

But things started to change in 1948 with the advent of radio and television.

A presidential debate debuted on a radio broadcast between Republican primary contenders Thomas Dewey and Harold Stassen. According to Clark and McManus, between 40-80 million listeners tuned in to the radio broadcast to hear the two debate over outlawing communism in the United States.

The radio debate was followed a couple of years later with the country’s first televised debate in 1952. This debate featured all potential presidential candidates and was hosted by the League of Women Voters (LWV).

1960 set the stage for modern debates

According to the Bill of Rights Institute, “Kennedy appeared to viewers as calm and collected, well groomed, and handsome”, while “Nixon, on the other hand, began to sweat, looked unshaven, and shifted his eyes between the camera, the moderators, and the clock.” 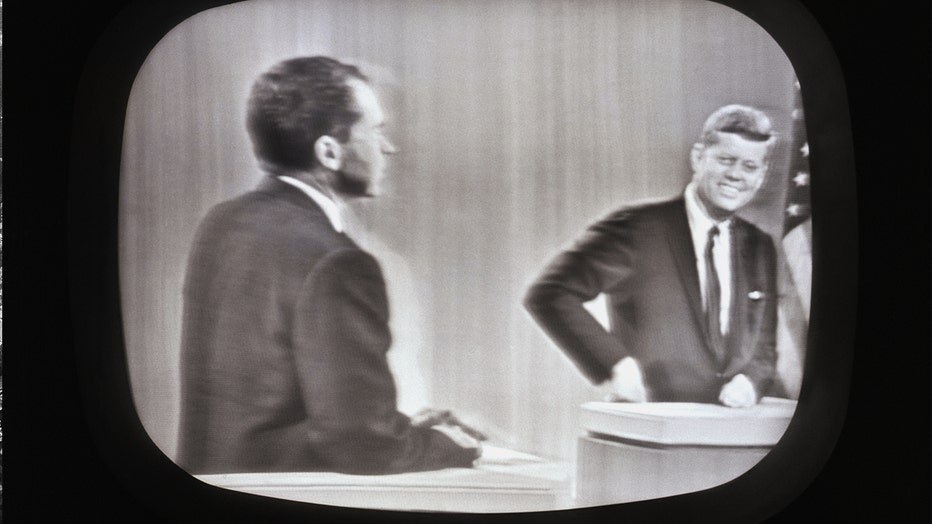 Vice President Richard Nixon and Senator John F. Kennedy during the last of their four debates in 1960 (Bettman/Contributor)

Interestingly, those who heard the debate on radio thought Nixon was the winner, while those who watched on television chose Kennedy, PBS noted. Nixon lost in the election that followed.

The televised debate built up the concept of presidential debates, and “the public began to expect debate between candidates; debates became an American institution,” Clark and McManus wrote.

In fact, since 1972, every presidential contest has included television debates, acknowledging the TV screen as an important element in the decisions of voters.

But, not all candidates were open to debates

In fact, there were no debates from 1964 until 1976, as seated presidents Lyndon B. Johnson and Nixon refused requests to debate.

Nixon even vetoed a bill that repealed the equal time provision of the Communications Act of 1934 — a federal communications law which required candidates in national elections to have equal exposure in the media. Thus, presidential candidates could use this provision to their advantage, refusing to debate.

In 1975, the Federal Communications Commission (FCC) said that as long as debates were sponsored by an organization outside of TV networks, then they would be exempt from equal time requirements. Therefore, the LWV was able to take control as the third party and run the presidential debates for eight years from 1976 to 1984.

Between this time period, debates proved to be crucial to decisions among voters.

In 1976’s debate, President Gerald Ford stated, "There is no Soviet domination of Eastern Europe." Many analysts believe his statement contributed to Jimmy Carter’s win in the election. 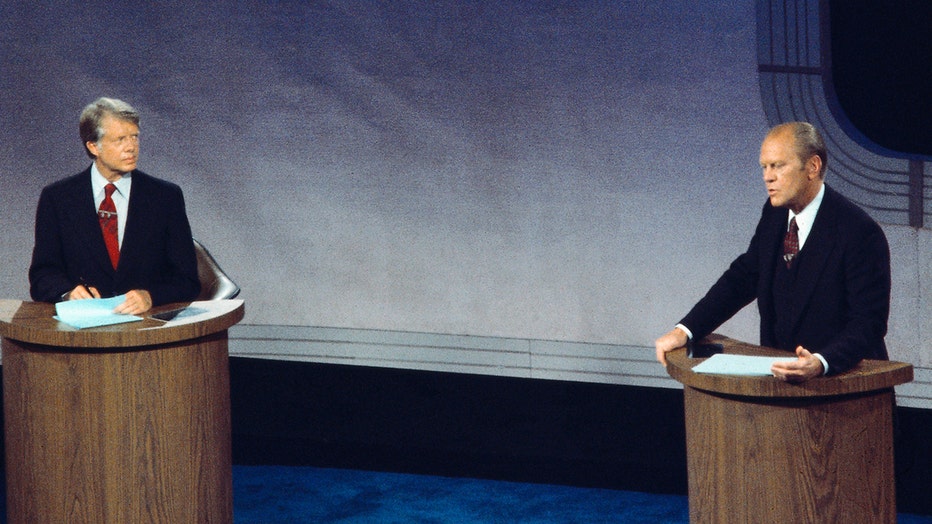 Democratic challenger Jimmy Carter (left) engages in a face-to-face political debate with incumbent President Gerald Ford in Philadelphia, PA, in the fall of 1976 during the height of the presidential campaign that year. (Wally McNamee/CORBIS/Corbis via Getty Images)

In 1980, Carter refused to debate with Republican nominee Ronald Reagan and independent candidate John Anderson in a presidential debate. Thus, the debate was held without Carter, and experts believe his absence was one factor in Reagan’s election win, according to PBS.

Throughout his presidency, Reagan became known as a talented debater, “mastering the art of short and effective soundbites that energized his political base,” the Bill of Rights Institute said.

In 1988, the Commission on Presidential Debates stepped in

In 1988, Democrats and Republicans formed the joint nonprofit bipartisan organization The Commission on Presidential Debates (CPD) — the only organization capable of legitimately hosting presidential debates.

“The CPD oversees height requirements for podiums and room temperature at debate halls, chooses moderators, and serves as a propaganda arm for both the Republican and Democratic parties,” Clark and McManus wrote.

In addition, the site of the debate must be neutral, meaning that the location cannot be associated with the candidate. Furthermore, an equal division of time to candidates is required at debates.

Debates continued to evolve in the 1990s

In 1992, there were many changes made to the traditional format of debates.

The changes included the incorporation of “town hall” debates, where candidates sat on stools instead of podiums and were asked questions from audience members.

Democrat Bill Clinton utilized and thrived in the new format by being able to engage directly with voters. 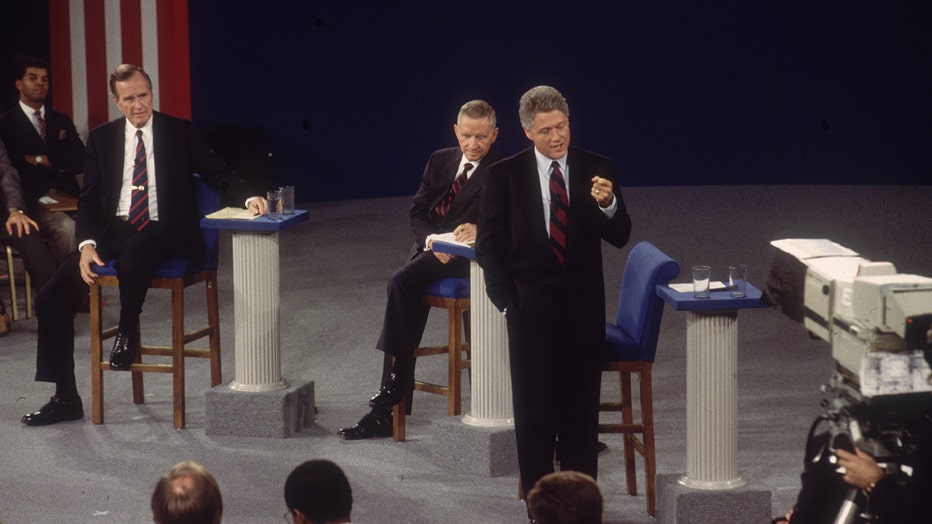 In the 2000s, the internet came into play

“Visual media, especially the internet, is one of the most important factors in modern elections,” the Bill of Rights Institute said.

Twitter was also launched in 2008, providing a platform for campaigns to argue on behalf of their candidates.

But as with all technology, there is a downside. Videos and on-air flubs can live on and be preserved by the public in the digital age.

“In 2011, during a Republican primary forum, candidate Rick Perry forgot core parts of his platform. In the age of the internet, debate footage never dies,” the Bill of Rights Institute said.

Today, many people get their news through social media, rather than television or print. But while more eyes may be on the debates than ever, they might be watching for less time. Data from YouTube found that the average YouTube viewer watched the three 2016 presidential debates for an average of 22 minutes.

Debates in 2020 continue amid a global pandemic

The CPD continues to organize and host presidential debates, despite the U.S. being in the midst of the COVID-19 pandemic. 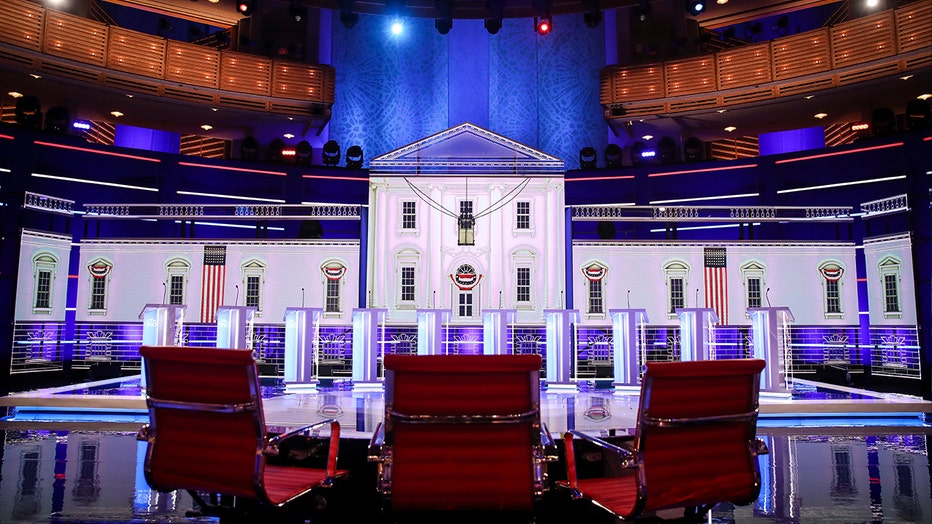 The stage is set for the first Democratic presidential primary debate for the 2020 election at the Adrienne Arsht Center for the Performing Arts, June 26, 2019 in Miami, Florida. (Drew Angerer)

There will only be one moderator and a limited audience due to COVID-19 precautions.

In addition, debates will be divided into six 15-minute sections, each covering a different topic.

There are technically no winners in debates, only a perception

There are technically no winners in debates, but they can help shape the opinions of voters. Pollsters track the effects of debates on voters’ mindsets by calling and inquiring about what they thought of the event.

But experts still argue over whether debates truly change or just further reaffirm a voter’s opinion.

According to Gallup polling, Hillary Clinton “won” all three presidential debates, and despite winning the popular vote, Donald Trump was elected president of the United States. 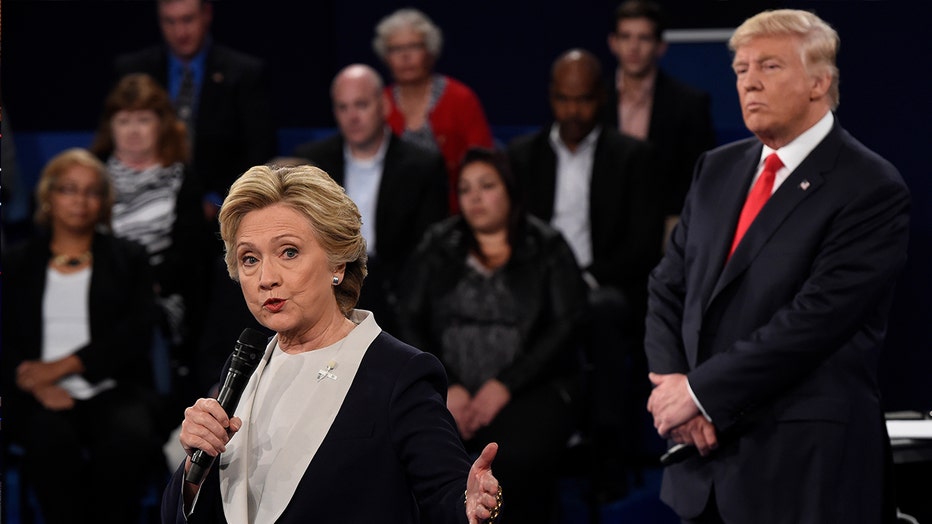 Whether debates are an effective means for candidates to sway voters’ opinions or not, the process could still prove beneficial for undecided voters in hotly contested swing states.