The Defence Intelligence of Ukraine has posted on Twitter that Russian President Vladimir Putin is "preparing a terrorist attack on the Chernobyl nuclear power plant." The department tweeted that a "man-made catastrophe" is planned at the plant and will be manipulated to appear as if Ukraine was responsible for the attack.

UKRAINE - According to the Defence Intelligence of Ukraine, Russian President Vladimir Putin is "preparing a terrorist attack on the Chernobyl nuclear power plant," the government agency claimed Friday.

According to a social media post on Twitter, the department said that a "man-made catastrophe" is planned at the plant and will be manipulated to appear as if Ukraine was responsible for it.

"Putin is preparing a terrorist attack on the Chernobyl nuclear power plant. A man-made catastrophe is planed [sic] at the CNPP controlled by Russian forces, for which the occupiers will try to shift responsibility to Ukraine," the department wrote.

These claims come just days after Ukraine closed the Chernobyl nuclear power plant that was disconnected from the nation’s power grid by Russian forces, potentially jeopardizing the cooling of nuclear material at the site. The plant is currently cut off from the electricity and is disconnected from the International Atomic Energy Agency's monitoring systems.

The department said Russian forces refused to give access to the station’s Ukrainian repairman, and instead, nuclear energy specialists from Belarus came, but under their guise, Russian saboteurs came in to organize a terrorist attack.

The agency also noted the Russian occupiers are preparing "to create evidence" of the involvement of Ukrainian defenders in the terrorist attack, claiming in the area of Antonov airport in Gostomel, Russian car refrigerators were noticed with Russians collecting bodies of fallen Ukrainian defenders to take them to the nuclear power plant and show them as killed "diversants of Ukraine." 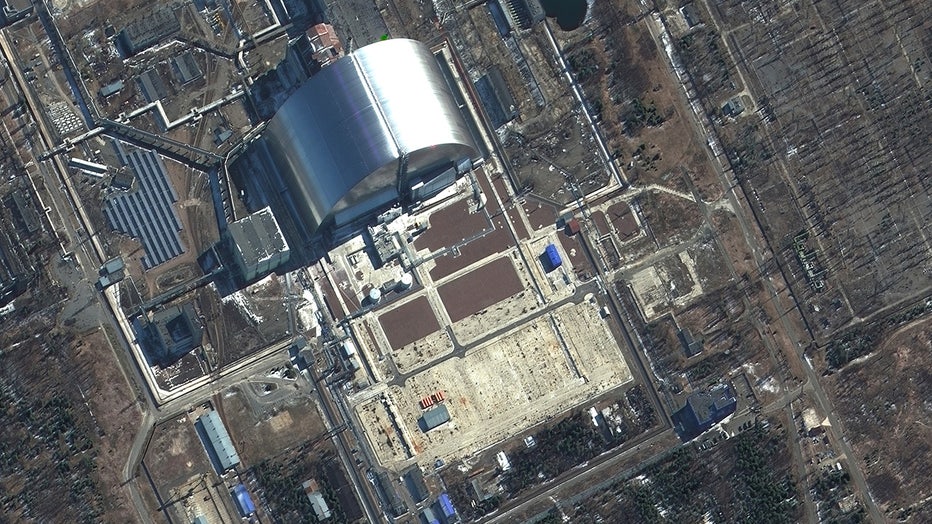 "Without getting the desired result from the ground military operation and direct negotiations, Putin is ready to commit to the nuclear blackmail of the world community for the sake of actions to support Ukraine," the government agency wrote. "Narazí and Ukraine, and the world, and Russia itself understand that the statements about Ukraine's involvement in the creation of nuclear danger are only a production based on a non-dangerous scenario."

The department continued, "Despite this, Putin's similar actions will have catastrophic consequences for the whole world. Looks like this is exactly what the Russian dictator is counting on, demanding unacceptable actions."

The Ukrainian Foreign Affairs Minister Dmytro Kuleba announced Wednesday that the only electrical grid supplying the Chernobyl nuclear power plant and all its nuclear facilities is damaged. He called on the international community to "urgently demand Russia to cease fire and allow repair units to restore power supply."

"Reserve diesel generators have a 48-hour capacity to power the Chornobyl NPP. After that, cooling systems of the storage facility for spent nuclear fuel will stop, making radiation leaks imminent. Putin’s barbaric war puts entire Europe in danger. He must stop it immediately," he continued.

More than 200 workers have been working at gunpoint since Russian soldiers seized the Chernobyl Nuclear Power Plant on Feb. 24, FOX News reported. Overnight shift employees who were supposed to work only for 12 hours have been running operations at the plant for two weeks.

Among the nuclear engineers, there is Natalia Ruemmele's 63-year-old father.

"Basically, the power plant is held by people who have no clue about the nuclear security protocols," Ruemmele told Fox News via Zoom from Munich, Germany.

For more than 40 hours now, the power has been cut off at the NPP, leaving facilities on reserve diesel generators that "have a 48-hour capacity," according to transmission system operator Ukrenergo.

Despite the power loss at Chernobyl, the International Atomic Energy Agency (IAEA) reported it "sees no critical impact on safety."

Chernobyl is the site of one of the world’s worst nuclear disasters, where a nuclear power reactor exploded and burned in 1986.

"The Chernobyl disaster caused irreversible damage to the environment that will last for thousands of years," Greenpeace announced in its 2016 study of the accident. "Never in human history has such a large quantity of long-lived radioisotopes been released into the environment by a single event."

This story was reported from Los Angeles. FOX News contributed.