A worker at a supermarket distribution center in Oconomowoc shot and killed two co-workers on Wednesday, a union official said.

OCONOMOWOC, Wis. - A worker at a supermarket distribution center in Oconomowoc shot and killed two co-workers on Wednesday, a union official said. That official identified the shooter, who is also dead, as Fraron Cornelius, 41, of Wauwatosa.

The shootings happened overnight in different locations inside the Roundy’s distribution center in Oconomowoc, about 30 miles west of Milwaukee, said Thomas Bennett, secretary-treasurer of General Teamsters Local Union No. 200. All three dead were men in their 40s.

A news release states law enforcement was called to the scene around 10:30 p.m. Tuesday for an "industrial accident." They quickly realized it was something worse.

One victim was found in a loading dock, while another was located in an upper area of the building. Life-saving measures were conducted but were unsuccessful. Both victims were pronounced deceased at the scene.

While searching the scene and gather information, officials say a suspect vehicle was located in Milwaukee -- and a pursuit ensued. The suspect vehicle crashed, and the since-identified shooter was pronounced deceased from a self-inflicted gunshot wound. 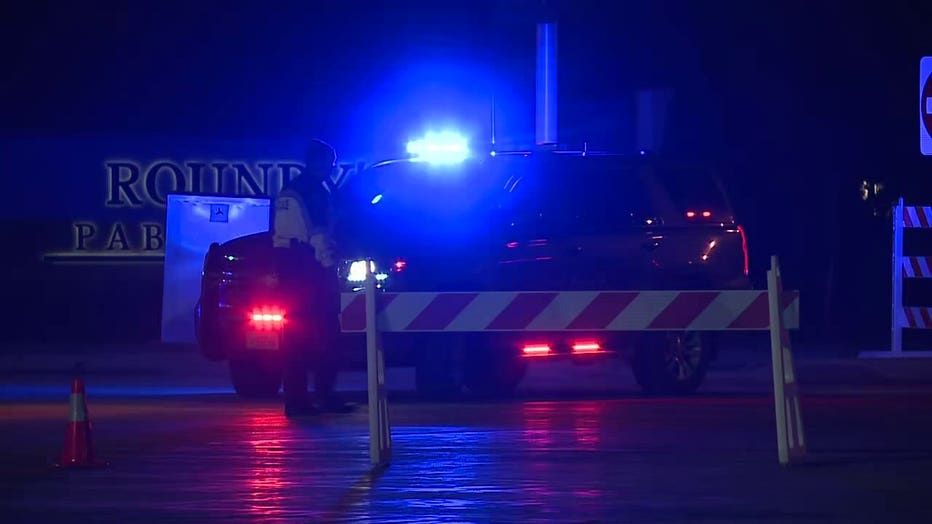 The facility in Oconomowoc was locked down temporarily, and police asked motorists to avoid the area near Wisconsin Highway 67 south of Interstate 94. The roads have since been reopened to traffic.

The Waukesha County Sheriff's Department and the Wisconsin Department of Criminal Investigation will be conducting the initial investigation of the incident at Roundy's.

Bennett said many union workers have been working overtime during the pandemic -- as long as 16-18 hours per day -- to keep stores stocked. He described the facility as a family.

The massive distribution center moves 2.2 million cases of product every week to grocery stores in Wisconsin and Illinois.

The Roundy’s complex employs close to 1,000 people. Roundy’s is a subsidiary of Cincinnati-based Kroger that operates Pick ’n Save and Metro Market stores in Wisconsin and Mariano’s grocery stores in northern Illinois.

SKYFOX shows you an aerial view of the tactical situation happening at the Roundy's Distribution Center in Oconomowoc.

"Our hearts go out to the two workers in Oconomowoc whose lives were taken by gun violence today. Kathy and I are thinking of them, their friends, their family members, and all those affected by this tragedy."

"General Teamsters Local Union No. 200 has heavy hearts this morning and will hold our comments until the authorities have fully completed their investigation. The Local Union has been in contact with several of our Roundy's Union Stewards and Kroger Corporate Management in Cincinnati, Ohio throughout the evening about the situation, and with respect to our Membership and their Families, we offer our sincere thoughts and prayers."

"We are deeply saddened by the incident that occurred last night at our Oconomowoc distribution center. The entire Roundy’s family offers our thoughts, prayers, and support to the families of our colleagues during this difficult time.

"We are cooperating with local law enforcement, who have secured our facility. Our distribution center will remain closed while the police investigation continues. We are providing counseling services to our associates.

"To protect the integrity of the ongoing investigation we are referring questions to the Oconomowoc Police Department."

"March 17, 2021 marks one of the saddest St. Patrick’s Days that the 38th Assembly District has ever experienced. Early this morning, we awoke to tragic news of what took place at the Roundy’s Distribution Facility. All of Oconomowoc and the surrounding area grieve with those who lost loved ones. We offer our support and sympathy to all of the workers at the warehouse. We offer our heartfelt thanks to the Oconomowoc and Summit Police Departments as well as all of the supporting law enforcement responding to the situation. And we also extend our sincere gratitude to the first responders of Western Lakes Fire Department.

"As the investigation unfolds in the coming weeks, I would ask residents of the 38th Assembly District to hold all of those directly affected in your prayers and offer assistance wherever needed. We are a resilient and neighborly community, and although this incident is heartbreaking, I trust that our citizens will unify to bring healing and compassion to all involved."

"My heart breaks for our two brothers from Teamsters Local 200 who were killed today in a terrible act of workplace violence at the Roundy’s distribution center in Oconomowoc. Every working person who gets up and goes to work should be able to make it home safely at the end of a shift. The Wisconsin AFL-CIO extends our deepest sympathy to the families of the victims of this tragic incident. We in the Wisconsin union movement also offer our support to each coworker impacted by this senseless and horrific violence."