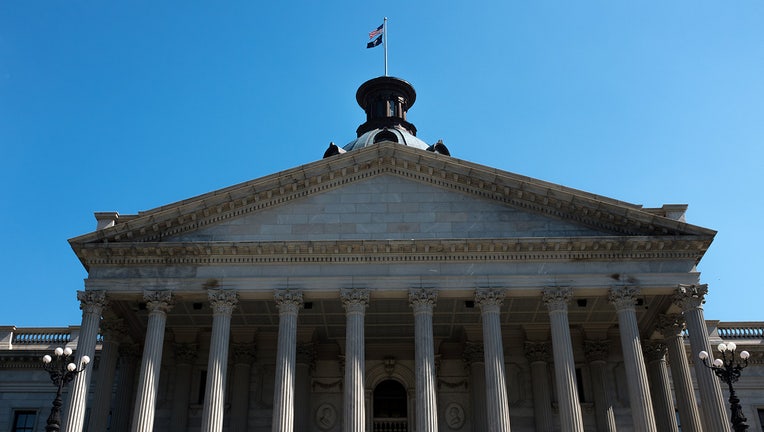 An exterior view of the South Carolina State House, Columbia - construction work first began in 1851 and was completed in 1907, it was designated a national historic landmark in 1976 for its significance in the post-civil war reconstruction era. (Pho

COLUMBIA, S.C. - A near total abortion ban in South Carolina that does not include exceptions for pregnancies' caused by rape or incest was sent to the state House floor Tuesday but not without hints and warnings that the lack of exceptions could cause a big legislative fight in a few weeks.

The House Judiciary Committee voted 13-7 to approve the ban. All yes votes were from Republicans and all votes against the bill from Democrats. But three Republican committee members who were at the meeting did not vote.

"Out of respect for the process, I’m not voting today," Republican Rep. Neal Collins said. "Myself and many other are not in position to vote for this bill without significant changes."

And at least one other Republican said there still is a lot of work to do not only on whether to add back exceptions but also to address if a total ban that right now includes a statement that "it is undisputed that the life of every human being begins at conception" means child support and tax breaks begin at conception too.

"It is more appropriate to allow 124 members to work through the various issues on the House floor," said Republican Rep. Weston Newton after saying he had voted for every other abortion restriction bill in his nearly 10 years in the General Assembly.

The full House with 80 Republicans, 43 Democrats and one vacancy will likely debate the bill at a special session called by House Speaker Murrell Smith in the next few weeks and decide whether to send the bill on to the Senate.

South Carolina currently has a six-week ban passed in 2021 that went into effect after the U.S. Supreme Court overturned Roe v. Wade in June.

The bill bans all abortions except when the life of the mother is in danger. It lists a number of different medical emergencies that would fit into the exceptions.

The legislation still has a long way to go before it could reach Republican Gov. Henry McMaster, wo said he wants to see no abortions in the state.

LINK: State by state: Abortion laws across the U.S.

Some Republicans, especially in the South Carolina Senate, have said they aren't sure they want to go any farther than the current law that prohibits abortions after cardiac activity is detected in the fetus, typically around six weeks after conception. They said a vote in Kansas preventing lawmakers from seeking more restrictions and other developments have them reassessing whether a total ban is a good idea right now.

"At the end of the day, though, half measures and amendments that make a cruel bill more palatable don’t move the ball for women," Wetmore said after the full committee meeting.

At a subcommittee hearing earlier in the day, Wetmore went through the bill section by section, pointing out how the doctors and experts she has spoken with with think it puts women’s health in danger.

Passing this bill will leave "doctors scared to practice; women scared to start families because they are worried this state will criminalize them if they have a miscarriage or worse leave them bleeding out in an emergency room while a hospital’s attorney decides whether the doctors can help," Wetmore said.

She also said without exceptions for rape and incest, South Carolina is putting both the physical and mental health of disabled women or young girls who are raped at risk.

"We’re too busy talking about controlling women’s body to do anything that actually keeps our women and babies alive," Wetmore said.

Outside of Rep. John McCravy, who has shepherded the bill to this point, no other Republicans spoke favorably about the substance of the bill.

House Judiciary Committee Chairman Chris Murphy, who generally runs genial, free flowing meetings, commented several times that Democrats were speaking too long and even ended Democratic Rep. Justin Bamberg's remarks before he could read a list of facts about the condition of women in the state.

Bamberg's Republican deskmate and friend is Collins, who then read off the list of dozens of ways South Carolina is ranked 40th or worse for women in infant and maternal mortality, wages, rates of chronic disease and other wellbeing measures before Murphy stopped him.

Outside the House's office building on Statehouse grounds about a dozen demonstrators with Planned Parenthood South Atlantic gathered. They were outnumbered by law enforcement, who set fencing and barricades expected to stay up most of the week.