Let's take a brief look at the history behind Halloween candy and how it became the sweetest day of the year.

Halloween is about more than just costumes and decorations for one major holiday retailer: It’s also about helping sick children.

Spirit Halloween stores sell Halloween costumes, spooky décor, party supplies and more, but they also give millions of dollars to Child Life programs in U.S. hospitals, thanks to Spirit of Children, the company's charitable foundation.

HALLOWEEN BY THE NUMBERS: FUN FACTS ABOUT THE SPOOKY DAY

The CEO of Spirit Halloween, Steven Silverstein, said in a recent phone interview that giving to these programs is "incredibly, incredibly important" to their corporate mission.

The group also knows how to throw a great party; with more than 150 pediatric partners throughout North America, Spirit of Children gives kids in the hospital a break from the challenges that go with treatment by providing non-medical "support," such as costume parties, parades and other fun activities at Halloween, Silverstein said. 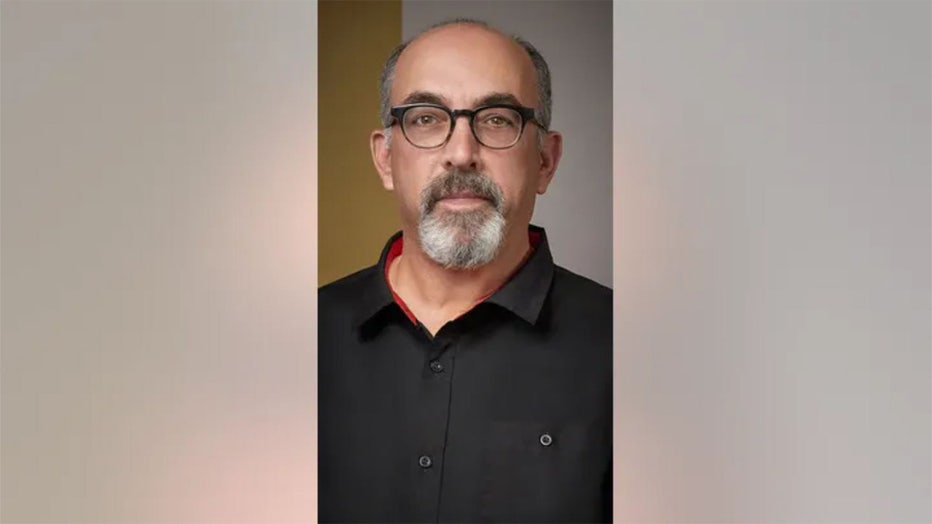 "As we began to grow, one of the challenges that we felt as far as being a Halloween store and a place where people felt entertained, was wanting to give something back to the communities that we were operating in," said Silverstein.

HALLOWEEN QUIZ! HOW WELL DO YOU KNOW THESE SURPRISING FACTS ABOUT THE SPOOKY HOLIDAY?

Noting that he has been with Spirit Halloween since 2003, when the company had about 150 locations and was "not particularly well-known," the group decided a focus would be giving back to those communities in which the company had brick-and-mortar store locations.

"So, we brainstormed," he said.

"Someone came up with the idea, ‘Well, you know, we're a Halloween store. Why don't we throw a Halloween party in a hospital?’"

HALLOWEEN 2022: THESE COSTUMES AND DECORATIONS COULD BE MONSTROUS THIS YEAR

Starting in southern New Jersey in about 2006, the business chose 10 or 11 hospitals for the Halloween parties. 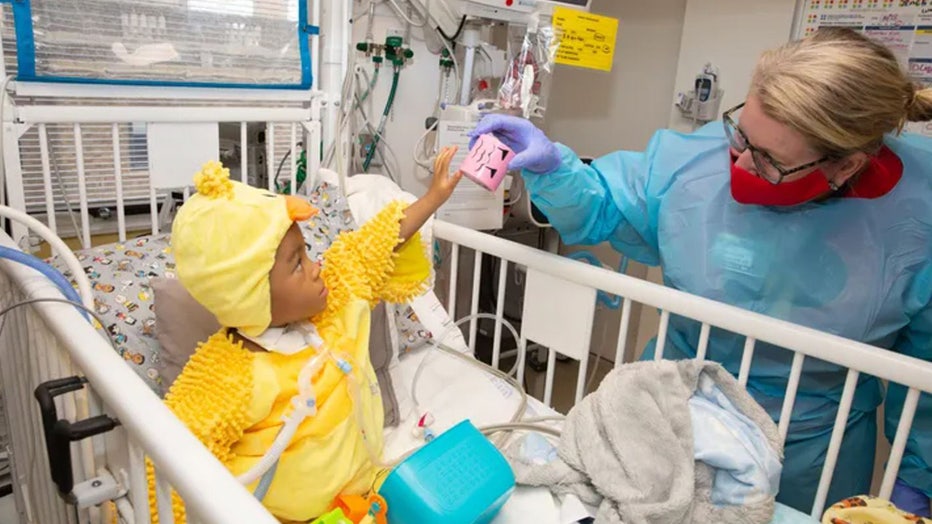 A child in the hospital dressed in a costume interacts with a nurse during a Halloween party thrown by Spirit of Children. (Children’s Hospital of New Jersey at Newark Beth Israel Medical Center)

"We brought Halloween costumes, music, art supplies — and we threw our first Halloween parties," he said. "And honestly, it was spontaneous combustion. The kids were absolutely transformed by it."

He said that it was then they knew "bringing Halloween to kids in hospitals was an extraordinary thing to do."

By 2007, Spirit Halloween was throwing parties in 34 hospitals — and wanted to do more.

"We thought, in addition to giving a Halloween party, why don't we add a fundraising component inside our stores so that people in the community could also support this?" he said.

The key is that the hospitals that Spirit Halloween support are in the local community, he noted. 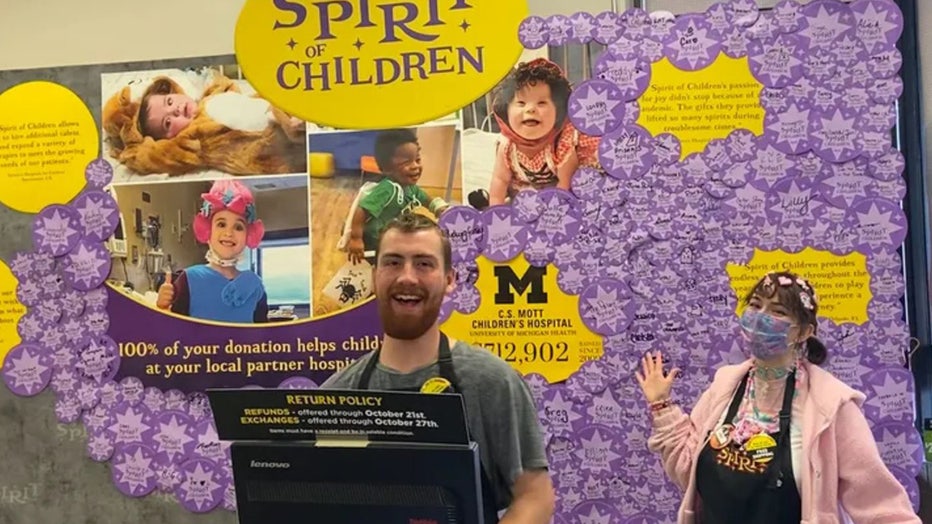 "So, we initiated a program to collect funds from customers at the register," he said.

"After you've had this wonderful experience in the store and you're in a very festive mood, you may want to give to your local hospital, to support children," he continued.

Saying they were "off to the races" after collecting approximately $200,000 for kids in hospitals in 2007, the company wanted to keep expanding the program, always keeping the focus local.

But instead of partnering with other national charitable programs — who could not commit to keeping donations flowing to local hospitals — they decided to run the program themselves, he explained. 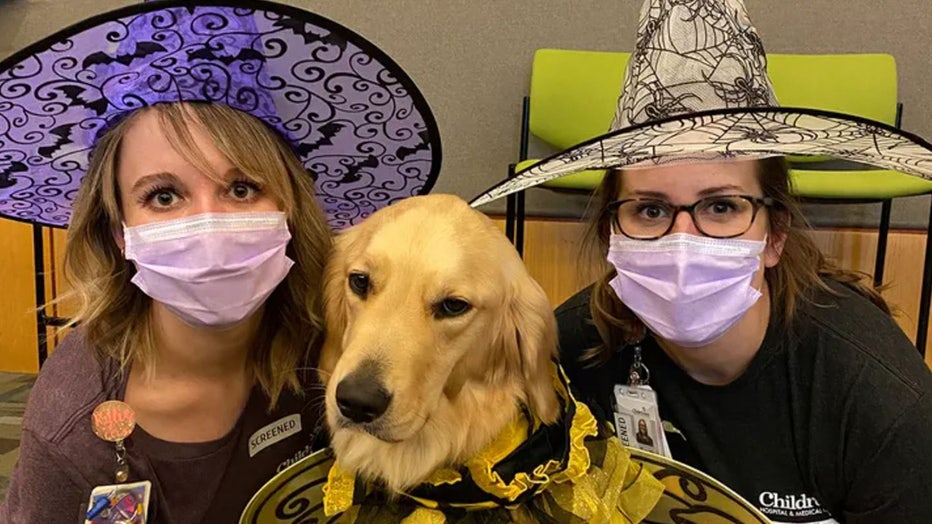 Noting that they are "now with 154 partner hospitals in the United States and Canada, we manage this program all by ourselves."

Throwing Halloween events for kids in hospitals offers "the sensory, the play, the entertainment — the distractions, really," Silverstein said.

"The things that let them be kids and let them be a bit more normal — because kids just want to be kids," he added.

"It's a tremendous philanthropic, very-targeted program that combines this magic of Halloween with the generous commitment of our customers at one dollar, two dollars at a time."

He added,"100% of the donation, 100% of the proceeds go directly to the Child Life department in your community's hospital."

He said that after a customer donates, "we ring a cowbell, we sign a purple pumpkin, and we keep it up on the wall."

He added, "We also give you a bracelet to signify your participation."

Silverstein noted how often Americans receive requests to donate to worthy causes. "We're asked so often to sort of blindly give — and we never see the fruits of the donation."

By keeping the donations community-based, Silverstein said the store locations can tell customers "what their impact is in their own community."

"We call the children the heart of Spirit Halloween, and it's a collective heart, because what really makes this program is the stores embracing it," he said.

MEET THE AMERICAN WHO CONJURED UP ‘LEGEND OF SLEEPY HOLLOW’: WASHINGTON IRVING, FIRST US CELEBRITY AUTHOR

He said that the store locations "have such pride in being able to talk about this to customers, and to give back in this way to their community, because it's the place they live, too — and they see the power and the impact and how these dollars add up, one to two dollars at a time — to millions."

He also said, "The stores are the ones that really keep the energy going."

There are two criteria for a hospital to receive donations from Spirit of Children.

It must have a child life department, and it must be a not-for-profit hospital, said Silverstein.

"For us, the challenge is to open more Spirit Halloween stores in the market or region where the hospital is." He added, "And the good news is, every year, we magically open more and more stores."

Silverstein said that when a family comes to the hospital because their child is receiving treatment, they are welcome to the Halloween parties — and siblings are, too.

"We're very happy to be able to provide costumes and fun for the siblings," he noted.

"It's incredibly emotional," Silverstein said of attending a Spirit of Children hospital event. "Kids aren’t supposed to be in the hospital, you know?"

He added, "I like to say Halloween is good for the soul."