WASHINGTON - A few hours after the Uvalde school shooting left 19 elementary schoolchildren and two teachers dead, U.S. Sen. Ted Cruz told a group of reporters that policies to restrict guns were off the table.

"That doesn’t work. It’s not effective. It doesn’t prevent crime," he said.

He’s since done a string of other interviews that have inflamed the left and encouraged the right, chastising Democrats and the media.

Meanwhile, Texas’ senior senator, John Cornyn, has taken a different route. He’s quietly, but openly, leading the party to work with some Democrats to pass bipartisan gun legislation — a role familiar to him as he has a track record of moving small pieces of gun policy into law in the wake of mass murders.

"I met with Sen. Cornyn this morning," U.S. Senate Minority Leader Mitch McConnell told CNN. "As you know, he went home yesterday to see the family members and begin the fact-finding of this awful massacre, and I have encouraged him to talk with Sen. [Chris] Murphy and Sen. [Kyrsten] Sinema and others who are interested in trying to get an outcome that is directly related to the problem."

"I am hopeful that we could come up with a bipartisan solution," he added.

Sinema, from Arizona, is a Democrat with whom Republicans say they can trust in the deal-making process. Murphy, from Connecticut, is the de facto Democratic leader on gun policy.

Both Cornyn and Cruz are top Senate recipients of gun industry political donations, per OpenSecrets.org.

And both senators were scheduled to attend the National Rifle Association annual convention in Houston on Friday. Cornyn’s team told reporters he could no longer attend because of "an unexpected change in his schedule." Cruz’s team did not respond to requests for comment about whether he would attend.

To be sure, Cornyn has touted an A+ rating with the NRA and has repeatedly voted with Cruz and other Republicans to stymie gun restriction legislation proposed by Democrats.

But in the decade since the shootings at Sandy Hook Elementary School in Newtown, Connecticut, the two Texans have diverged in how they respond politically to shooting tragedies.

In the hours after the shooting, Cruz quickly started talking about the need for more resources to secure schools. It’s a cause he has chased almost since he first came to the Senate and one he revisited repeatedly in interviews in recent days.

Cruz argued on Fox News that if the funding he had proposed multiple times over the years in the School Security Enhancement Act had passed, the school would have had an armed officer monitoring the door. 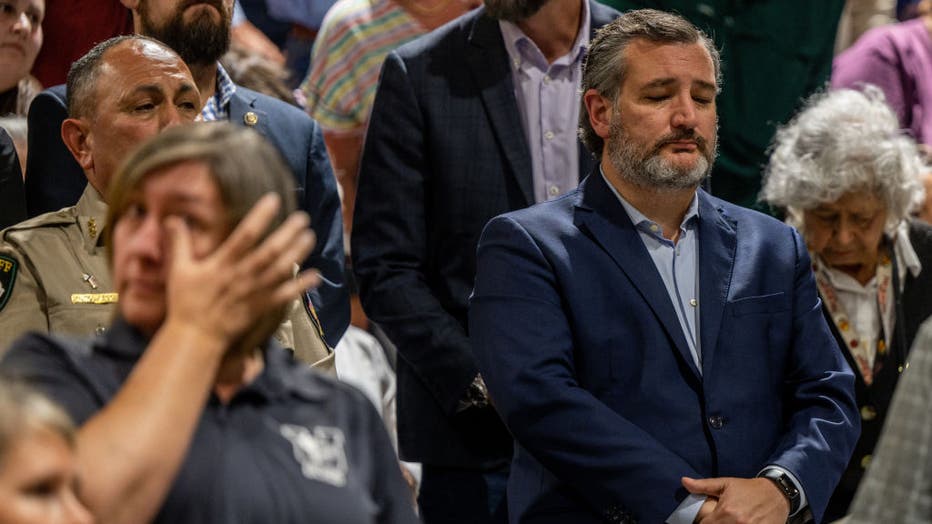 UVALDE, TEXAS - MAY 25: U.S. Sen. Ted Cruz (R-TX) listens during a prayer at a vigil for the 21 victims in the mass shooting at Robb Elementary School on May 25, 2022 in Uvalde, Texas. Nineteen students and two adults were killed, with the gunman fat

"If those federal grants had gone to this school when that psychopath arrived, the armed police officers could have taken him out," Cruz said Wednesday.

On Wednesday afternoon, Cruz went to Uvalde Elementary School and gave an interview with reporters, lamenting that the school’s back door was unlocked.

"The killer entered here the same way the killer entered in Santa Fe, through the back door, an unlocked back door," he said, noting that after the shooting at Santa Fe High School in 2018, he spoke with members of the community about the need to ensure entry points were minimized.

He later engaged with a reporter from British-based Sky News and blamed Democrats and the media for politicizing the shooting when asked about gun policy. Cruz began to walk away after the reporter asked him why the United States has such an outsized number of mass shootings compared with the rest of the world.

"You know, I’m sorry you think American exceptionalism is awful," Cruz said. "You’ve got your political agenda. God love you."

Cornyn, a former judge and state attorney general, is a close ally of McConnell. Until he was term-limited out of the post in 2019, he served as the Republican Senate whip, meaning he long had his finger on the pulse of his conference members.

While not a favorite of Senate Democrats, he does have relationships with members on the other side, including Sinema and Murphy.

Sinema is a more junior senator, but she has enraged Democrats for her insistence on keeping the filibuster in place.

Murphy won his first Senate race in November 2012. About a month after he won that race, the Sandy Hook Elementary School shooting occurred in the House district he represented. That day defined his career to the extent he sometimes wears a Newtown jersey when playing in the Congressional Baseball Game.

The two men met today to initiate conversations, and they have a productive history. 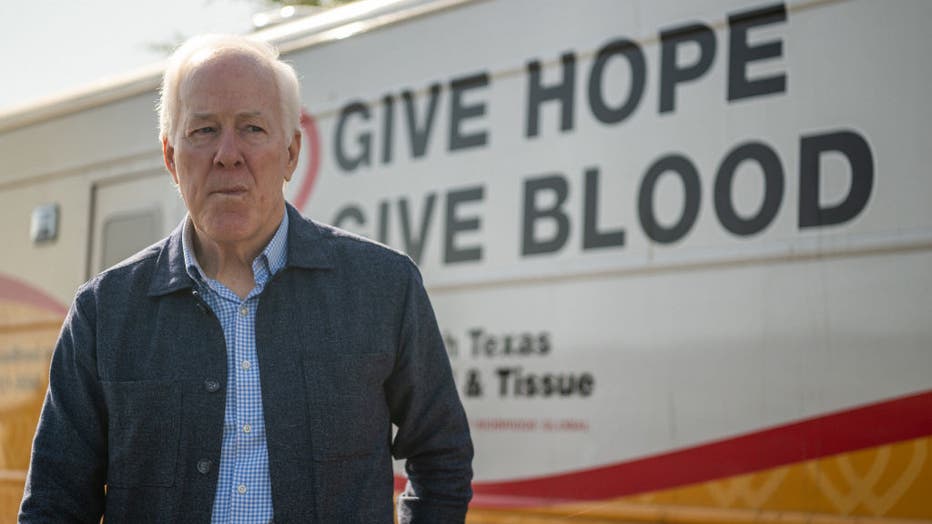 He and Cornyn worked together on the Fix NICS Act, which Cornyn helped author in the wake of the 2017 Sutherland Springs church shooting near San Antonio. The legislation, referring to the National Instant Criminal Background Check System, was intended improve the system in order to prevent felons and domestic abusers from purchasing firearms. The bill passed as a small section in a massive 2018 spending bill.

Prior to that bill, Cornyn shepherded into law the Mental Health and Safe Communities Act, a piece of legislation that funded the screening and treatment of offenders with mental illness. Cruz backed that measure when it was added to a larger bill addressing innovation in medicine.

And after a 2017 mass shooting on the Las Vegas strip, Cornyn was a leading advocate in banning "bump stocks," which allow semiautomatic guns to fire faster. President Donald Trump’s Department of Justice banned the devices in 2018.

Cruz has not joined in with Cornyn’s approach. When Cornyn introduced his signature gun bill, the Fix NICs Act, he was able to wrangle 77 senators, including many Republicans, to sign on as co-sponsors. Cruz was not one of them.

The center of these negotiations is the U.S. Senate.

The House already passed background check legislation this term, and according to a New York Times survey of senators, there is no path to get a House-passed bill through a Senate filibuster.

So far there is no sense of what a bill would address. Republicans like McConnell say they will only support a bill that is directly related to the Uvalde shooting, and that investigation is ongoing and murky.

Cornyn has had success in the past at passing small gun measures that mostly avoid a significant far-right backlash.

But the last time the Democrat-controlled Senate went big on gun policy with legislation to require universal background checks in the aftermath of the Newtown school shooting, the entire legislative push expired at the hands of a mostly Republican bloc that included Cruz and Cornyn.

It fell apart in such a painful way for Democrats that many on the Hill began to accept it was impossible to change gun policy without winning the 60 seats needed to override a filibuster.

As for Cornyn, he telegraphed on the Senate floor Thursday that he intended to let the Uvalde investigation play out before making any significant moves.

"At this point, law enforcement is still investigating and piecing together the full story," Cornyn said, indicating the specificity in his approach. "In the coming days I expect we will have better information about the shooter and his background and the circumstances that led to this senseless, brutal act."

Disclosure: The New York Times has been a financial supporter of The Texas Tribune, a nonprofit, nonpartisan news organization that is funded in part by donations from members, foundations and corporate sponsors. Financial supporters play no role in the Tribune’s journalism. Find a complete list of them here.