AUSTIN, Texas - Texans went to the polls on Tuesday as the Lone Star State kicked off the 2022 midterm election season, picking their nominees for governor, attorney general, congressional seats and more – with some heated races forced into a runoff.

With the next state primaries not coming until May, Texas is far ahead in offering the first glimpse of just how far to the right the Republican Party will shift in a state where many in the party have already tightened their embrace of former President Donald Trump. It also previews what messages are sticking for Democrats.

Incumbent Republican Gov. Greg Abbott secured his party's nomination for another term after Tuesday's voting. Starting the campaign with more than $50 million, he has built hard-line positions on guns, immigration and abortion. Abbott will take on Democratic nominee Beto O'Rourke in the fall.

Abbott, who has served as Texas governor since 2015, built up a bankroll of money before O’Rourke even entered the race last November — and experts say Beto is unlikely to catch up financially and faces uphill odds.

"The difficulty for Beto O'Rourke is giving Democrats hope that he can actually be victorious," Mark P. Jones, a fellow in political science at the Baker Institute, told FOX 4 Dallas in a Feb. 15 interview.

O’Rourke, former congressman and short-lived presidential candidate who nearly ousted Texas Sen. Ted Cruz in 2018, will get the chance to try for an even bigger upset in November. He’ll be an underdog against incumbent Republican Gov. Greg Abbott, who looked poised to lock up his party's nomination after beginning the campaign with more than $50 million and staking out hard-line positions on abortion, guns and immigration.

Some of those casting ballots, however, said they were worried about new restrictions on abortion that are the toughest in America going too far.

Republican George P. Bush has forced a runoff against Texas Attorney General Ken Paxton, who’s trying to hang onto his job while under the cloud of an FBI investigation into corruption allegations. Paxton has broadly denied wrongdoing.

Paxton was ahead Tuesday night as the top vote-getter in a crowded race but failed to capture the more than 50% of the vote needed to avoid a runoff. Bush, 45, is the son of former Florida Gov. Jeb Bush and currently the Texas land commissioner. He’s the only member of his famous family still in public office.

Since taking office in 2015, Paxton has become one of the nation’s most prominent state attorneys general, leading lawsuits against Big Tech and trying to overturn the 2020 presidential election. But he has also spent those years dogged by a felony indictment on securities fraud charges and revelations that donors and allies have benefited from his office.

A bigger threat to his political future looms after several top deputies resigned in 2020 and reported Paxton to the FBI over accusations that he used his office to help a wealthy donor.

The runoff is in May.

Neither candidate Tuesday night got more than 50% of the vote needed to win outright.

The race was among the most heated in Texas’ primary. Cuellar is among the most conservative Democrats in Congress, and a Cisneros victory would bring a seismic liberal shift to the district that runs from San Antonio to the Texas border.

Cisneros is a former intern of Cuellar’s who also ran against him in 2020. She narrowly lost, and this time ran a more aggressive campaign that attacked Cuellar over FBI agents searching his home just before voting began.

The Associated Press has learned that the investigation relates to the former Soviet Republic of Azerbaijan. Cuellar has not been charged with a crime and has denied wrongdoing.

Meanwhile, U.S. Rep. Van Taylor has also been forced into a Republican primary runoff in his North Texas district by former Collin County Judge Keith Self. Taylor, a former Marine and Iraq war combat veteran, was considered one of the Texas delegation’s most conservative members when he was elected in 2018.

But he’s been sharply criticized by the right-wing of the party for criticizing the Jan. 6 insurrection and voting to certify Trump’s loss in the 2020 election. His predicament shows how the GOP has diminished the gravity of the Capitol attack and the political mood in the state.

Self is an Army veteran and graduate of the U.S. Military Academy. He has claimed Taylor drifted from his conservative roots in the GOP-dominant district. He heavily criticized Taylor’s votes on the election result and insurrection investigation, and how Taylor voted to remove Confederate statues from the Capitol. 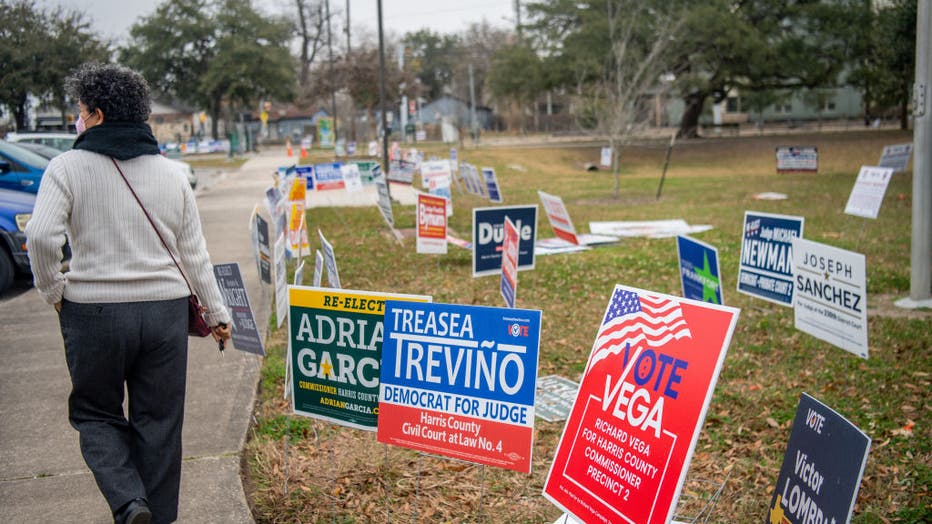 FILE - A person exits after casting their ballot at the Moody Community Center on Feb. 24, 2022, in Houston, Texas. (Photo by Brandon Bell/Getty Images)

This year’s primary season comes at a pivotal moment in American life.

The U.S. is steadily moving out of the deepest lows of a pandemic that has raged for nearly two years. But that's tempered by inflation reaching a decades-high level and a burgeoning war in Europe. And there are persistent questions about the country's commitment to basic democratic principles after many GOP leaders have tied themselves to Trump's widely discredited claims that the 2020 election was stolen — a phenomenon especially acute in Texas.

"There really isn’t a candidate on the Republican side who is someone who is standing up for the rule of law and supporting the fact that the 2020 election was free and fair and accurate," Christine Todd Whitman, a former Republican governor of New Jersey who is critical of Trump, told the Associated Press. Whitman is also the co-chair of States United Democracy Center, a nonprofit that works to safeguard elections.

Overall, Republicans were betting that Tuesday will be the first step toward them easily retaking Congress in November, pointing to President Joe Biden’s low approval ratings, spiking inflation and the anger about the chaotic withdrawal of U.S. forces from Afghanistan.

What sets the 2022 Midterm Elections apart

Primary turnout is typically low in Texas, and this year so far has been no exception: Early voting hovered in the low single digits among the state’s 17 million registered voters. But this primary was also the first test of a GOP-engineered election overhaul that Texas Republicans muscled through the state Capitol last year.

At least 17 other states this year will also hold elections under tougher rules, some driven by Trump’s unfounded claims about the 2020 presidential election.

The rushed rollout of new rules for Texas’ early primary led to thousands of mail ballot applications and actual ballots getting returned. In Harris County, officials said more than 40% of the first batch of mail ballots to come in from the Houston area had to be sent back, mostly because they did not include required identification and signatures now mandated under Texas law.

Secretary of State John Scott, who is overseeing his first election as Texas’ elections chief after being appointed by Abbott, said the issues were the result of voters adapting to new rules.

He anticipates the May runoffs and November elections will run smoother and said he does not think the issues so far and concerns expressed by local officials amount to a failure by the state.

RELATED: How to vote in the 2022 Texas primary election

When are the 2022 midterm elections for other states?

Twelve states will hold primaries in May, and June will be the busiest month with 18 states holding elections.

There’s a lot at stake during the 2022 midterm elections throughout the country. Both chambers of Congress and dozens of governorships and state offices are up for grabs, effectively putting the direction of the country at a crossroads.

Click here to see the full 2022 primary calendar, which states have gubernatorial, Senate and House seat elections, and more.

This story was reported from Cincinnati. The Associated Press, Austin Williams and FOX 7 Austin contributed.