CORPUS CHRISTI, Texas - A Starbucks employee in Texas has gone viral after the employee secretly passed a note to a female patron to make sure she did not feel threatened by an older man speaking with her.

The 18-year-old female was sitting alone at a Starbucks in Corpus Christi over the weekend when a man approached her actively and strangely, Brandy Roberson, the woman’s mother, said in a Facebook post, which has since been deleted.

"Are you okay? Do you want us to intervene? If you do, take the lid off the cup," the Starbucks cup's note read, according to the post Roberson shared.

Roberson told Fox News Digital that she appreciates the concern the Starbucks employees showed and the steps they took to ensure her daughter felt safe inside their store.

"I absolutely feel safer knowing that people are watching out for others, especially teenage girls," Roberson wrote to Fox in a Facebook message. "I do not feel this was sexist in any way. I truly believe that they would have done it for anyone who was in a vulnerable situation, regardless of gender." 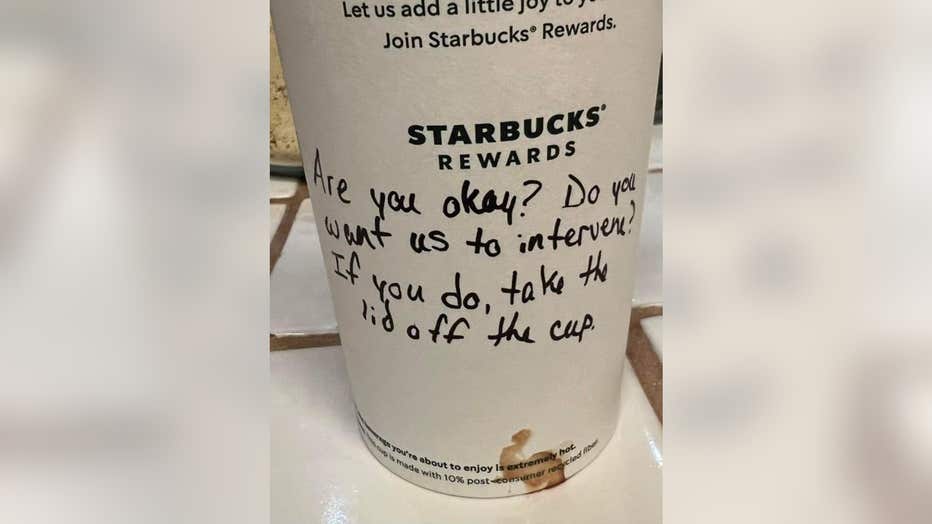 Texas mother Brandy Roberson shared a photo of a Starbucks cup with a secret message that was shared with her daughter at a Corpus Christi location after employees worried that a male patron might be bothering her. The note said, ‘Are you okay? Do yo

Representatives at Starbucks confirmed to Fox News Digital that employees at the Corpus Christi coffee house stepped in to help Roberson's daughter. The chain declined to comment on the story further.

Roberson was unable to recall the details of what the man said to her daughter that drew up concern when Fox News Digital inquired. However, she did tell local news station WKYC that her daughter described the man that approached her as loud.

"[My daughter] was sitting at her table alone studying, and this man came by and noticed what she was studying and wanted to talk to her about it," Roberson told WKYC. "He, I think, just kind of became really loud and animated about it."

Following the interaction, an employee then passed the 18-year-old "an extra hot chocolate someone forgot to pick up" with the note that instructed her how she could secretly notify staff, should she feel threatened, Roberson’s post said.

Her daughter did not feel threatened and ultimately did not remove the lid, though she was appreciative of the careful gesture, the mother added.

The staff continued to monitor the situation and both the teen and her mother thanked the staff, WKYC reported.