UVALDE, Texas - Emotions boiled over at Monday night’s Uvalde CISD board meeting on the heels of a damning new report on the failures during the deadly shooting at Robb Elementary School.

"I see DPS in the room, and I can’t help but wonder if they just didn’t find our children worthy of being saved," said Angie Villescaz, founder of the group "Fierce Madres." 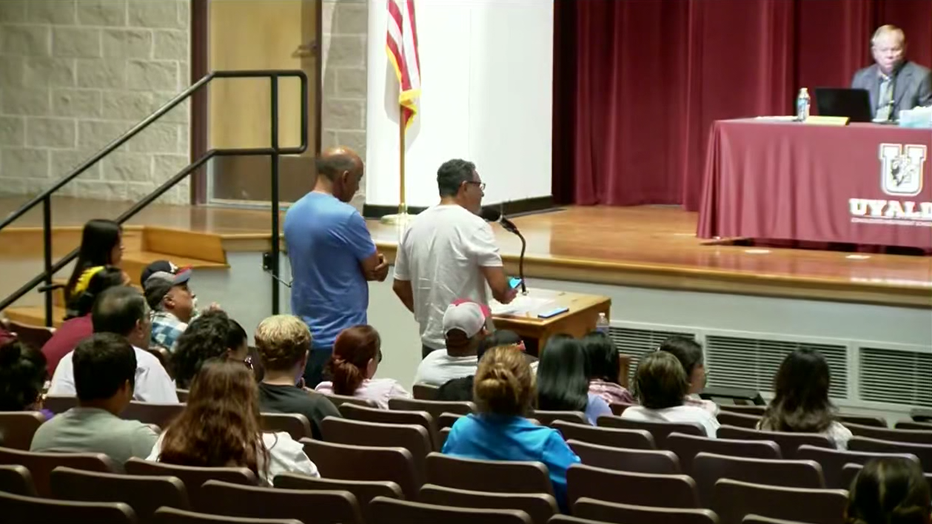 Many of those at the meeting were family members of those killed, like 11-year-old Layla Salazar’s grandfather.

"We paid over 40 percent of the city budget for the school and the police, and you hired trash. That’s not right. I lost a loved one right here, my only granddaughter," said Vicente Salazar.

"I don’t know if this killer was bullied, but he was killed by a bully," said Ryan Ramirez, father of 10-year-old Alithia Ramirez.

The Texas House Investigative Committee's more than 70-page report takes a detailed look at the timeline of the day of the shooting.

Over the course of three hours, there were numerous calls for Uvalde School District Police Chief Pete Arredondo to be fired, after a legislative report released Sunday found he failed to do his duty. Currently, Arredondo is on paid administrative leave.

"Your boy Pete, he dropped the ball big time. He’s at a school, with children, and he doesn’t know who’s in command," said Pastor Daniel Myers of the Tabernacle of Worship in Uvalde.

"I do hereby demand that Pete Arredondo’s administrative leave be rescinded and his employment with UCISD be terminated," said Michelle Prouty, who lives next door to Robb Elementary.

Others like Jesus Rizo, whose niece, 9-year-old Jackie Cazares, was killed in the shooting, called for Superintendent Hal Harrell to resign.

"You need to ask yourself a question, is it best for me to step down to step aside for the better of the community," said Rizo. "Maybe that is the best legacy you can leave behind, sir."

Many parents expressed concern about sending their own children back to school in Uvalde this fall, without a major safety and security overhaul.

"I have a son going into the fourth grade, afraid for his life, only to go back to school and remember that he lost his cousin in that very grade," said Laura Garza, the aunt of one of the victims.

VIEWER DISCRETION ADVISED: Raw body camera has been released as officials continue to investigate the shooting that left 21 people dead.

But for many, those words just aren’t enough.

"I need Uvalde to be where we turn the page, and from here forward every school in America will follow what Uvalde is about to put in place," said Villescaz.