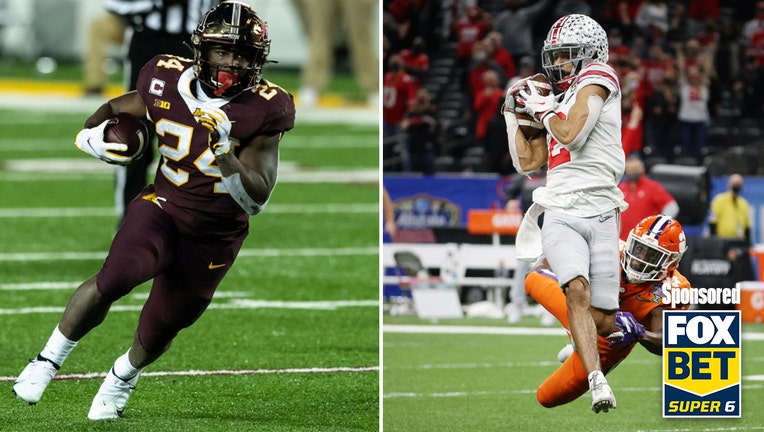 NEW ORLEANS, LOUISIANA - JANUARY 01: Chris Olave #2 of the Ohio State Buckeyes catches a touchdown pass in front of Derion Kendrick #1 of the Clemson Tigers in the third quarter during the College Football Playoff semifinal game at the Allstate Sugar

In the Big Ten right now, there is one gold standard. And it is dressed in Scarlet and Gray.

From the time Urban Meyer stepped on campus in Columbus, the conference has been run by The Ohio State University, and Ryan Day’s program hasn’t skipped a beat since he took over in 2019. Day’s team is 23-2 under his command, losing only in the College Football Playoff semifinal in 2019 to Clemson and in the 2020 championship to Alabama.

Minnesota looked like it was stepping up in class after an 11-2 campaign and a bowl win in 2019. But COVID-19’s shortened schedule and graduations hit head coach P.J. Fleck’s Golden Gophers hard last year en route to a 3-4 season that was among the most disappointing in college football.

Both teams arrive at the start line of the 2021 season with high hopes, albeit at different levels. The Buckeyes – even with Justin Fields gone to the Bears – have their eyes on a second CFP championship. The Gophers try to regain the moment of what Fleck was building. Add it all up, and Thursday night’s kickoff (8 p.m. ET, FOX) at TCF Field in Minneapolis is filled with delicious subplots.

And you could win some tasty cash yourself to start the Labor Day weekend with FOX Bet Super 6. Just answer all six questions about how the game will unfold correctly, and you could take home $10,000. It’s fast and it’s free, and all it takes is downloading the FOX Bet Super 6 app on your phone or mobile device.

Here are the six questions and a little scouting report before Thursday night’s game.

How will the first points of the game be scored?

Trends carrying over from one year to another is a dangerous thing to project. That being said, the last three games of the Buckeyes' 2020 season (Northwestern in Big Ten title game, Clemson in CFP semifinals, Alabama in the title game) saw the opposing team score the first touchdown of the game. If Minnesota is going to hang in this one, it has to strike first.

That’s easier said than done. CJ Stroud should be the starting QB for the Buckeyes, and he has the potential to be a big factor.

Which team will score the most points at the half and how many will they score?

The Buckeyes led at the half in every game but two last season – the Big Ten title game against Northwestern (where they were held to just two first half field goals) and the national title game against Alabama. Overall, they averaged 24.3 points per game in the first half.

Which team will have the most rushing yards, and how many will they have?

The options: Ohio State, Minnesota, or tie, with a scale of 0-276+ rushing yards

There’s a two-headed monster in Columbus at running back with Miyan Williams and Master Teague, both figuring to get some handoffs from Shroud. It doesn’t hurt when you consistently have incredible NFL type lines in front of you.

Minnesota has Mohamad Ibrahim, who was awarded the Big Ten’s Running Back of the Year award. But the Gophers could be playing lots of catch-up.

Which team will have the most passing yards, and how many will they have?

The options: Ohio State, Minnesota, Tie with a scale of 0-351+ offense yards

The Buckeyes are brimming with weapons that are untested but also highly sought-after. One guy to keep an eye on for Ohio State who does have some experience under his belt is wide receiver Chris Olave, who had seven touchdowns in seven games last year.

If the Gophers are going to have a chance, Tanner Morgan will have to play better at quarterback than he did a season ago. His numbers Thursday could be inflated thanks to some desperation passing after the game’s result has been determined.

Who will have the most total offensive yards, and how many will they have?

The options: Ohio State, Minnesota, Tie with a scale of 0-551+ offensive yards

Just like the passing yards, this is where the number could get wacky. Ohio State has the best talent on both sides of the ball in the Big Ten. That’s not up for debate. But if the Buckeyes end up running up a really big number, they could play off the ball with backups in, and that’s where things get very interesting.

All that being said, you always take the blue blood here.

Which team will win and by how many points?

The options: Ohio State, Minnesota with ranges of 1 to 21+ points

Remember last year when Minnesota’s season opener was spoiled by a mediocre Michigan team at TCF Stadium? Ohio State isn’t mediocre, and they will embarrass you at the drop of a hat. If they aren’t in the playoff again, it would be a huge surprise. And they should have a nice Thursday night workout to open the year.

Download the FOX Bet Super 6 app now to predict the outcomes of the biggest events in sports, and you could win thousands of dollars absolutely for free each and every week. Just download and play!