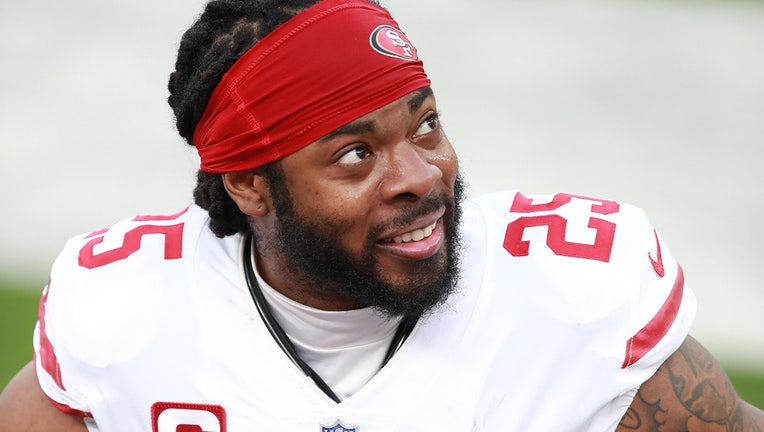 INGLEWOOD, CALIFORNIA - NOVEMBER 29: Richard Sherman #25 of the San Francisco 49ers speaks to a teammate on the bench in the second quarter against the Los Angeles Rams at SoFi Stadium on November 29, 2020 in Inglewood, California. (Photo by Joe Scar

TAMPA, Fla. - The Tampa Bay Buccaneers are adding yet another big name in their quest for a second-straight Super Bowl ring. All-pro cornerback Richard Sherman said he agreed to join the Bucs to bolster their battered defense.

"I finally had enough conversations and came to a decision that I’m going to play for the Tampa Bay Buccaneers. Woohoo!" he said on his podcast Wednesday. "I went with the best offer I had. The best opportunity to go out there, put some great tape on, and lead another group."

Following his podcast announcement, the Bucs made it official on Twitter.

The Buccaneers’ secondary has been beaten and abused the last three weeks, surrendering more passing yards than any other team in football after starting cornerback Sean Murphy-Bunting left with an injury early in Week 1.

Murphy-Bunting is likely going to miss another month and Jamel Dean is now unlikely to play this weekend with a knee injury suffered on Sunday in Los Angeles.

The 10-year veteran and five-time Pro Bowl cornerback came into this season unsigned after spending the first seven years of his career with the Seahawks and the last three with the 49ers.

It was not immediately clear how soon Sherman could be available to hit the field.

"I feel comfortable and confident in my abilities to go out there and execute and help my team win," he said. "I’m ready to strap ‘em back up, go out there, and show that these old legs still got some juice."