NORMAN, Okla. - Marcus Carr hit the go-ahead basket in the final minute as No. 6 Texas escaped Oklahoma with a 70-69 victory in the Big 12 opener for both teams on Saturday.

It was the Longhorns’ fourth straight win on the Sooners’ home court.

Oklahoma (9-4, 0-1) led for most of the second half behind 22 points from Grant Sherfield, and had a chance regain the lead in the final 30 seconds. But freshman Milos Uzan’s 3-point attempt bounced off the back of the rim and the Longhorns (12-1, 1-0) hit six straight free throws down the stretch to seal the victory — withstanding a half-court shot at the buzzer from Oklahoma’s Jacob Groves. 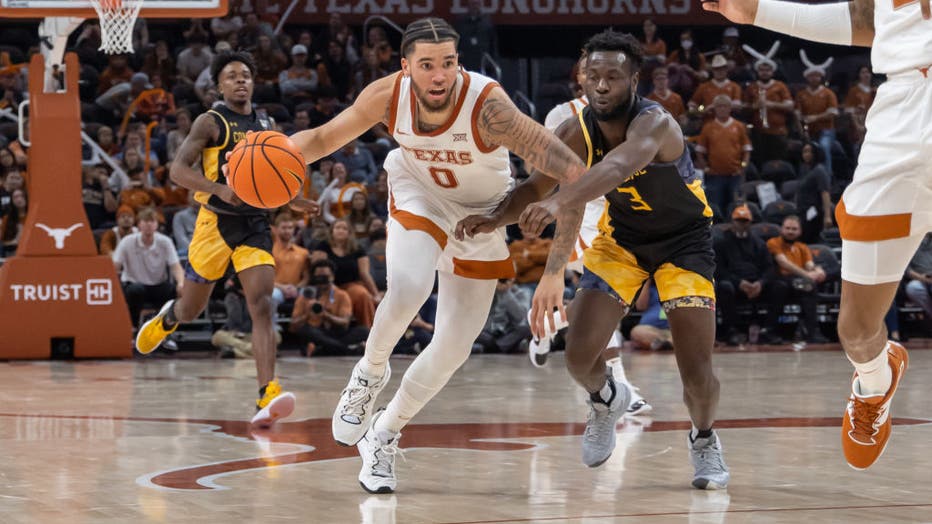 It was the sixth win in a row for Texas, and raised the record of acting coach Rodney Terry to 5-0; he’s guiding the Longhorns during coach Chris Beard’s suspension.

Carr, who had 41 points in his last outing for the Longhorns, didn’t get his first bucket until the final 75 seconds of the first half. He finished with 13 points, as did Timmy Allen. Groves scored 17 points, including 5-of-9 from the 3-point line.

The Sooners led by as many as seven in the first half and settled for a 35-31 intermission lead.

Sir’Jabari Rice led the Longhorns’ comeback, getting fouled on a 3-point attempt and hitting all three free throws to tie the game at 60. Rice made all seven of his free throws — all in the final two minutes — and finished with 11 points and seven rebounds.

TEXAS: The Longhorns have now won 24 of the last 36 meetings against Oklahoma and has won the last three in a row.

OKLAHOMA: Missed eight straight field-goal attempts midway through the second half, allowing the Longhorns to get back in the game. The Sooners came in ranked 10th in the NCAA in field-goal percentage (50.5) but wound up at 48% in this one, hitting just nine of 25 3-point attempts.