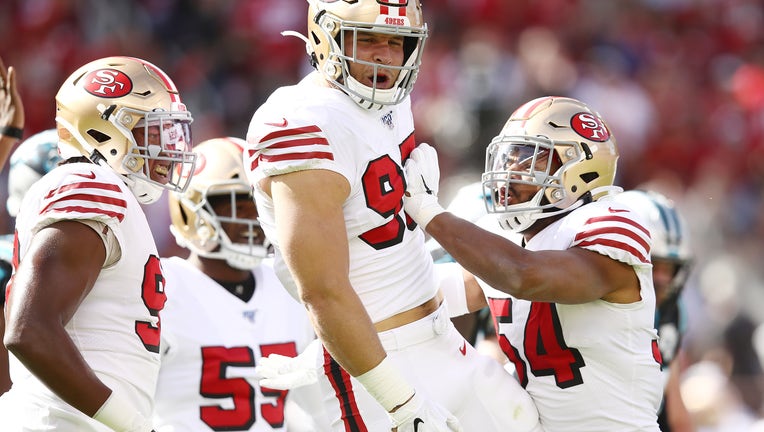 SANTA CLARA, CALIFORNIA - OCTOBER 27: Nick Bosa #97 of the San Francisco 49ers celebrates after sacking Kyle Allen #7 of the Carolina Panthers (not pictured) during the first quarter at Levi's Stadium on October 27, 2019 in Santa Clara, California. (

Week 9 brings an NFC West showdown to Thursday Night Football on FOX as the undefeated San Francisco 49ers travel to Arizona to take on the Cardinals. This is the first meeting between the top two picks in the 2019 NFL Draft – Cardinals quarterback Kyler Murray and Niners defensive end Nick Bosa.

Bosa recorded three sacks and an interception in Week 8 as San Francisco routed the Carolina Panthers 51-13 to improve to 7-0 for the first time since 1990. The 49ers defense has allowed the fewest total yards (224.4) in the NFL this season and they are the first team since 1977 to hold opposing quarterbacks to 100 or fewer net passing yards in four consecutive games.

Kyler Murray and the Cardinals enter Week 9 having won three of their past four games. Murray has thrown at least two touchdown passes in three of his first four career home games and leads all rookie quarterbacks in passing yards, with 1,988.

49ers-Cardinals kicks off at 8:20 PM ET on FOX with play-by-play announcer Joe Buck and analyst Troy Aikman, along with reporters Erin Andrews and Kristina Pink on the sidelines and NFL Rules expert Mike Pereira joining to give explanations on officiating and rules throughout the game.