Are tornadoes going to be more common in Central Texas?

FOX 7 Austin wants to break down the why's, how's, and what to expect from severe weather in our area going forward. Carissa Lehmkuhl spoke with meteorologist Carlo Falco to learn more about tornadoes.

On March 21, 2022, multiple tornadoes ripped through Elgin, Granger, and Round Rock. Up to 400 homes were damaged in Round Rock alone and a video of a 16-year-old driving his red pickup truck through a tornado in Elgin went viral.

FOX 7 Austin wants to break down the why's, how's, and what to expect from severe weather in our area going forward. Carissa Lehmkuhl spoke with meteorologist Carlo Falco to learn more about tornadoes.

Carissa Lehmkuhl: Here to break down how these tornadoes form is meteorologist Carlo Falco. Carlo, let's just start with the very basics. What are the key ingredients to form a tornado?

Carlo Falco: Well, the number one thing you need for a tornado is you need a thunderstorm. That's the basic thing there. And for that to form, you need warm, humid air. You need a forcing mechanism, which normally is a cold front, but can also be a dry line. And you need cool air cooled a dry air at the mid and upper levels of the atmosphere. Once that gets going, you can get what's called an updraft, which is the air from the surface rising up into the upper levels of the atmosphere. And then crucially, what you need from that to go into a tornado is you need that thunderstorm to start to rotate. What that happens is when you get what's called wind shear, which is when the wind, say, at the surface of the surface is blowing from the south, but at the mid-levels of the atmosphere is blowing from the west. So that will give you kind of a rotation like this. And that starts the tornado to the thunderstorm rotating and that's called the supercell thunderstorm.

Carissa Lehmkuhl: So is that criteria essentially what you look for to spot these potential tornadoes ahead of time?

Carlo Falco: Yeah, the wind shear and especially the directional wind shear is a big part of what we're looking for, for basically forecasting when these tornadoes are going to be possible. But tornadoes on the ground. That is a much more difficult thing for us to spot.

Carissa Lehmkuhl: Yeah. How do you spot those on the radar? What do they even look like?

Carlo Falco: Well, spotting them on the radar is very, very complicated. Basically, what you're looking for is what's called a TV's or a tornado vortex signature. You can see it right here. It's those Greene's right now up next to the Reds on radar. So this is a velocity image of the radar. Doppler radar uses the Doppler effect, which is a complex physical phenomena of electromagnetism, to basically measure the wind speed in the atmosphere. And when you get those greens and reds right up next to each other, that means that the wind is moving very, very quickly in opposite directions. And that's an indication of rotation. In addition, you can see that right there. That is what's called a textbook supercell radar presence with the area indicated by that blue arrow. That is a debris ball. So that is crucially what we look for as well. We can also look for what's called a correlation coefficient hall, which is the radar measuring the different particles in the atmosphere. Rain is all about the same size particle, but once you get a tornado lofting up to BRI like pieces of branches or, you know, God forbid, pieces of houses, that's when the correlation coefficient, basically the different particles in the atmosphere can get very, very different. And it shows us as a much darker color than what normally would show.

Carlo Falco: Well, that's what the National Weather Service does. After there's a confirmed tornado. They'd go out and they do what's called a storm survey and they look for the damage to assess approximate the wind speed. So an EF zero would be a 65 to about 85 mile per hour wind. That is still can cause some significant damage but is not considered a strong tornado. That's a weak tornado. EF ones, you're getting a little bit stronger, up to about 110 mile per hour winds. EF twos are starting to get into the strong category with up to 135 mile per hour winds. These are the tornadoes which start to snap trees in half. An EF three tornado can rip trees out of the ground, toss cars around and create winds up to about 165 miles per hour. F-4 tornadoes are the really dangerous ones. EF five, of course, are stronger than that with winds up to about 166 to 200 miles per hour. As these winds blow through everything, they can entirely destroy and demolish entire communities.

Carissa Lehmkuhl: All right. Thank you so much for breaking that down for us, Carlo. 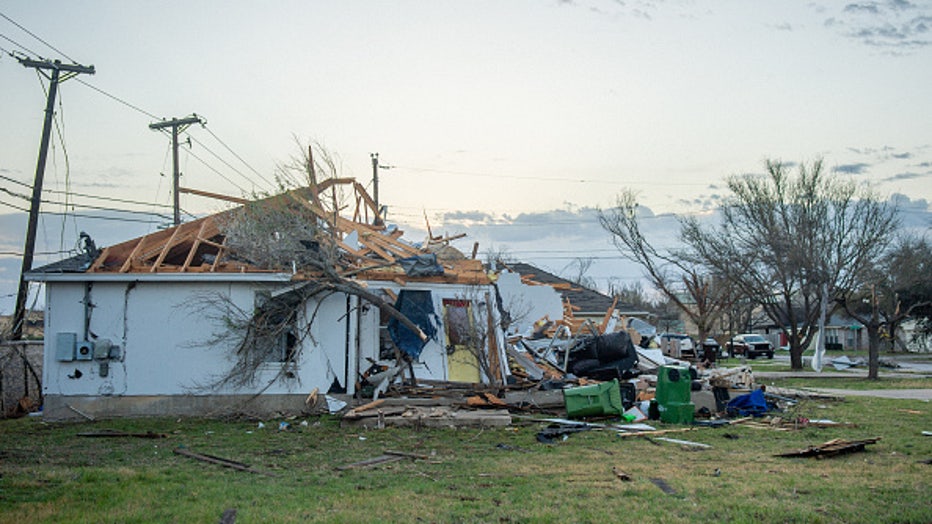 A tornado-damaged home is seen on March 22, 2022 in Round Rock, Texas. A series of tornadoes touched down in multiple cities throughout Texas causing widespread damage. . (Photo by Brandon Bell/Getty Images)