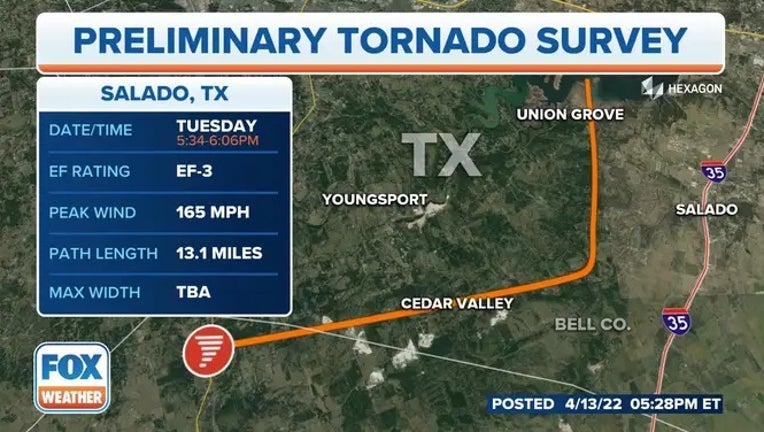 The tornado touched down in Williamson County just after 5:30 p.m. and lasted over a half hour, stretching at least 13 miles into Bell County, according to the National Weather Service. (FOX Weather)

SALADO, Texas - A strong tornado that tore through Bell County, Texas and injured nearly two dozen people Tuesday has been rated as an EF-3 on the Enhanced Fujita Scale.

The tornado touched down in Williamson County just after 5:30 p.m. and lasted over a half-hour, stretching at least 13 miles into Bell County, according to storm survey teams with the National Weather Service.

The storm caused extensive damage along about an 8-mile path, especially in the town of Salado. Bell County Judge David Blackburn said 63 homes and churches suffered damage of varying degrees in his county.

More than 60 homes were damaged and more than 20 people were injured after a tornado touched down in Bell County.

Meteorologists estimated the damage was consistent with 165 mph winds, rating the tornado a strong EF-3 and only 1 mph short of garnering an EF-4 rating.  It ranks so far as the second-strongest tornado in 2022, only behind the EF-4 tornado that struck Winterset, Iowa on March 5.

No one was killed in the twister, but 23 people were injured, according to emergency managers. Judge Blackburn said out of the nearly two dozen injured, 12 required treatment at area hospitals and at least one person was in critical condition.

The tornado in Bell County on Tuesday evening was classified as a high-end EF-3 tornado.

PowerOutage.US reported nearly 100,000 power outages in Texas during the early hours of Wednesday.

The NWS says they will provide additional information on the tornado track later Wednesday or Thursday.

3 tornadoes in the area Tuesday

The tornado in Bell County was one of three to strike that area of Texas Tuesday evening, according to NWS Fort Worth. An EF-0 tornado touched down near Seaton at 7:22 p.m. and lasted nine minutes before fizzling. Peak wind speeds were estimated at 75 mph.

A third tornado confirmed by spotters tracked for nearly four miles across an undeveloped area of Fort Hood military base.

The area is difficult to access, so forecasters will not be able to survey the storm and will leave with an undetermined rating, though noting no known damage occurred.

Dozens of homes have been leveled by a destructive EF-3 tornado that ripped through the Salado area earlier this week.