LAKEWAY, Texas - Fighting to stay in office, George P. Bush — the last of the Bush family still on the ballot — greeted a small outdoor crowd at an Austin brewery sounding like most Republicans running in Texas’ primary Tuesday.

He’ll secure the border. He’ll support police. He didn’t mention Donald Trump, but his campaign passed out leaflets showing him with the former president: the man who mocked Bush’s father, shoved aside the Bushes as the GOP’s standard-bearer and isn’t endorsing him for Texas attorney general.

It’s a heated race that, if Bush doesn’t win, will take America’s most enduring political family out of elected office for one of the few times in the last 50 years.

"It’s distinguishing myself as opposed to just being known as a Bush," he said afterward. "And that’s my challenge. That’s on me."

Not long ago, winning wasn’t hard for Bush, 45, who is the son of former Florida Gov. Jeb Bush, the nephew to one former president and the grandson of another. He was easily elected Texas’ land commissioner in 2014 and regarded then as not only the future of the Bush family but maybe the GOP itself — young, Hispanic and cutting a broader appeal.

But the start of the 2022 midterm elections could bring a pause — or even an end — for the Bush family in politics unless he at least forces a runoff against Republican Attorney General Ken Paxton, who despite a felony indictment and FBI investigation into accusations of corruption remains formidable in the Texas GOP.

The race — which will go to a May runoff if no one captures 50% of the vote — is the most contested and bruising in Texas’ primary, and as far as an early glimpse of what’s to come in races across the U.S., the takeaway is that Republicans aren’t through rushing to the right. As early voting was underway, Paxton’s office issued a legal opinion calling gender-confirming care for transgender kids child abuse.

Two of his other challengers, Rep. Louie Gohmert and former Texas Supreme Court Justice Eva Guzman, would not outright say in a recent debate that President Joe Biden won the election — which Paxton tried overturning in a failed lawsuit. Bush does not dispute Biden’s victory. 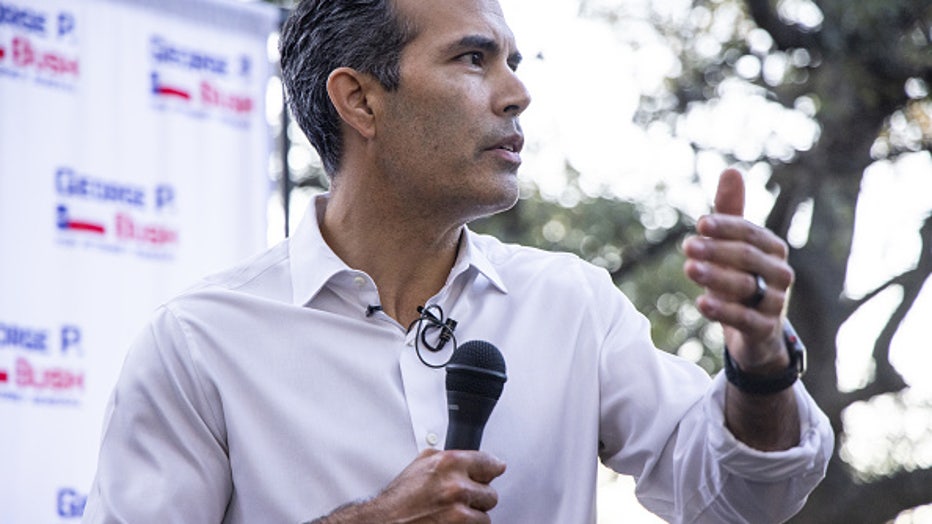 George P. Bush, Republican candidate for Texas attorney general, speaks during a campaign event in Lakeway, Texas, U.S., on Thursday, Feb. 10, 2022. Bush, the grandson of one president and nephew of another, is hoping a famous name and his own ties t

But the doubts baselessly fanned by his rivals reflect the challenge he faces in winning over what has become the GOP mainstream, which has moved to embrace Trump even more closely since he left office. Bush has bucked his family in his support of Trump, but Tuesday will test his belief that he can rally both conservatives and what he called "traditional Republicans."

The last Bush to try to enter politics was two years ago when Pierce Bush, one of George P. Bush’s cousins, ran for a congressional seat in Houston but finished third in the primary —- becoming the first member of his family to lose a race in Texas in 40 years.

"Most people in Bush world always thought of Jeb as the future and George P. as an understudy many years away from the main stage," said Reginald Brown, an attorney who has worked for Jeb Bush and former President George W. Bush, and is on the board of the former president’s library.

Brown has been a donor to both Paxton and George P. Bush and said he considers Paxton a friend, having hosted dinners for the attorney general at his home in Virginia. "The future got here a lot faster though and P. is keenly aware that his time to shine is pretty much now," he said in an email.

But that, too, has become an attack among Bush’s rivals — that he is only out to climb the next career rung.

"George is entitled," Guzman said to Bush during their only debate Thursday. "And I’m sorry you’re so mad that I’m running, George. I know you thought this was your job."

But the biggest hurdle for them both is Paxton, who has Trump’s endorsement and has shrugged off the ongoing investigation of his alleged corruption, dismissing his former top deputies who reported him to the FBI as possible criminals themselves.

But behind the scenes the embattled Republican has taken the federal probe far more seriously, marshalling the resources of his office in ways that appear aimed at resisting and blunting its political impact.

Two former employees of the attorney general’s office said that since the federal investigation began Paxton’s new top deputies have discouraged staff from cooperating with the FBI.

The employees, who spoke on condition of anonymity out of concern with retaliation, said they received similar messages from Paxton’s chief of staff, Lesley French, and First Assistant Attorney General Brent Webster. In separate meetings, both employees said they were told that they shouldn’t talk with agents without a lawyer provided by the attorney general’s office.

Paxton’s office did not respond to messages seeking comment.

Bush’s family hasn’t sat out the race. George W. Bush, the former president and Texas governor, donated $100,000 in the final weeks and Jeb Bush chipped in $25,000. George P. Bush said he talks strategy with his uncle and didn’t rule out having his family campaign for him in a runoff.

"People have fond memories of my family’s record, whether it’s here in Texas or, you know, in the White House," Bush said. "But this is about Texas. This race is about the future."