"I have recently learned that the Texas State Bar — which has been waging a months-long witch-hunt against me — now plans to sue me and my top deputy for filing Texas v. Penn: the historic challenge to the unconstitutional 2020 presidential election joined by nearly half of all the states and over a hundred members of Congress," Paxton said in a statement released on social media. "I stand by this lawsuit completely."

A few hours after saying he was being sued by the bar, Paxton’s office announced an investigation into the Texas Bar Foundation for "facilitating mass influx of illegal aliens" by donating money to groups that "encourage, participate in, and fund illegal immigration at the Texas-Mexico border." The foundation is made up of attorneys and raises money to provide legal education and services. It is separate from the State Bar of Texas, which is an administrative arm of the Texas Supreme Court.

Representatives for the Texas Bar Foundation could not immediately be reached for comment. 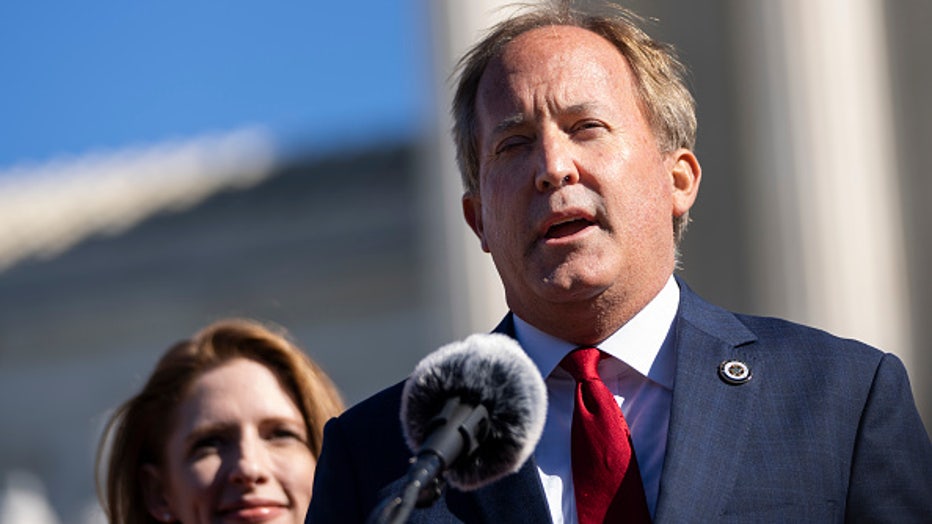 Paxton, an embattled Republican seeking a third term, said state bar investigators who now appear to be moving on a lawsuit against him are biased and said the decision to sue him, which comes a week before early voting in his GOP runoff for attorney general, was politically motivated. He is facing Land Commissioner George P. Bush in the May 24 election.

"Texas Bar: I’ll see you and the leftists that control you in court," he said. "I’ll never let you bully me, my staff or the Texans I represent into backing down or going soft on defending the Rule of Law — something for which you have little knowledge."

In fact, the investigation into Paxton has been pending for months. Last July, a group of 16 lawyers that included four former state bar presidents filed an ethics complaint against Paxton arguing that he demonstrated a pattern of professional misconduct, including his decision to file a federal lawsuit seeking to overturn the 2020 presidential elections in battleground states where former President Donald Trump, a Paxton ally, had lost. The attorneys said the lawsuit was "frivolous" and had been filed without evidence. The U.S. Supreme Court dismissed it, saying Texas had no standing to sue.

In March, the investigation moved ahead and Paxton was given 20 days to decide whether he wanted a trial by jury or an administrative hearing to resolve the complaint.

"I was as surprised as you were to see that tweet this morning," Harrington said.

Because Paxton appears to have chosen a trial over an administrative hearing, the case would be tried in Travis County, Harrington said. The case would not be overseen by a judge from the heavily Democratic county, however. Instead, it will be overseen by a judge from outside the county but within the Texas Judicial Branch’s administrative region, which stretches north to Hill County, west to San Saba County, east to Austin County and south to Lavaca County.

Sylvia Borunda Firth, the State Bar of Texas’ president, said in a statement that the group is "dedicated to fostering ethical conduct in the legal profession and protecting the public through the attorney discipline system" which provides procedural rules to process, investigate and prosecute complaints.

"The system is designed to ensure fairness to all parties," she said. "Partisan political considerations play no role in determining whether to pursue a grievance or how that grievance proceeds through the system. Any claims to the contrary are untrue."

Borunda Firth said the bar’s 12-person volunteer committee called the Commission for Lawyer Discipline provides oversight to the group’s disciplinary counsel, which administers the discipline system with help from volunteer grievance panels across the state. The committee members determine whether an attorney violated the state’s rules of professional conduct and what sanction is appropriate.

"These unpaid volunteers devote countless hours to hearing and considering cases to ensure attorneys are fulfilling their obligations to the public," she said. "Without them, the attorney discipline system could not function. We are grateful for their service."

Separately, Paxton faces multiple other scandals. He continues to fight a seven-year-old securities fraud case and last year came under FBI investigation for abuse of office after eight of his former deputies accused him of bribery. He’s also asking the Texas Supreme Court to throw out a whistleblower case against him by four of those former employees, who allege they were fired after they reported Paxton to authorities. Paxton has denied all wrongdoing.

Disclosure: State Bar of Texas has been a financial supporter of The Texas Tribune, a nonprofit, nonpartisan news organization that is funded in part by donations from members, foundations and corporate sponsors. Financial supporters play no role in the Tribune's journalism. Find a complete list of them here.