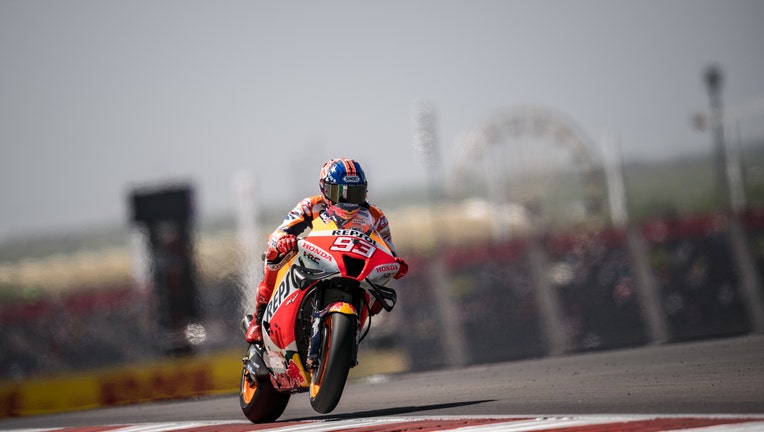 AUSTIN, TEXAS - APRIL 08: Marc Marquez of Spain and Repsol Honda Team rides during the free practice session of the MotoGP of USA at the Circuit Of The Americas on April 08, 2022 in Austin, Texas. ( (Photo by Steve Wobser/Getty Images))

AUSTIN, Texas - Marc Marquez is back in Texas after his latest bout with injuries and vision problems with shaken confidence and lowered expectations for the Grand Prix of the Americas, a race he has dominated for nearly a decade.

These are trying times for Spain's six-time MotoGP champion as he confronts rare uncertainty on his Repsol Honda and even some fear of what could happen if he has another hard crash.

Marquez is racing this weekend after a scary crash in warm-up laps for the Indonesian Grand Prix on March 20 left him with double vision that knocked him out last Sunday's race in Argentina.

"In the way of confidence I feel much worse, that's obvious after another injury, with the vision. It's something that makes me scared," Marquez said this week. "(But) I can't fear that I cannot crash. Racing is my passion."

A podium finish Sunday at the Circuit of the Americas would go a long way toward energizing what has been a troubling season for Marquez, whose last championship was in 2019. His 2020 season was wiped out by injuries from a crash in the first race, and 2021 was a struggle to regain his winning form. He still won three times last season, including in Austin, only to crash in a training session. That fall disrupted an ocular nerve and caused a bout of double vision.

MotoGP back at Circuit of The Americas

FOX 7 Austin's Tierra Neubaum gets all the details about another action-packed weekend at COTA as the Red Bull Grand Prix of The Americas returns to Austin.

And that's what happened again with the crash in Indonesia that sent Marquez to the hospital for a concussion. It was hours later on his flight home to Spain when the double vision problems started again.

"I don't remember much. I remember more from the video and the images than what I felt" in the crash, Marquez said "I feel lucky about that crash" that it wasn't even worse.

Lucky but still unnerved about the recurring vision problems. "It's something that makes you scared, it makes you very uncomfortable, even for a normal life," Marquez said. "The first week was difficult. The second week was better every day."

Regaining the confidence to ride and take risks at high speed has proven difficult, even for a racer who already ranks among the greatest in the sport's history at the age of 29.

"Third, fourth, fifth injury in three years. And difficult injuries," he said. "Two weeks ago, I wasn't motivated to even come here. I was motivated to sit on the sofa and not take care of anything. My brother (Honda LCR rider Alex Marquez) helped me a lot, pushed me to train again."

Crashes happen in MotoGP and often. A mid-race tumble in 2019 is the only time Marquez hasn't won in Austin. Marquez spoke with his doctor about the risk of more vision problems when he inevitably falls off his motorcycle again. The problem first occurred back in his Moto2 racing days after a crash in 2011.

MotoAmerica talks about MotoGP race at Circuit of the Americas

Another action-packed weekend is in store at COTA as the Red Bull Grand Prix of The Americas is back in Austin. Fans from around the world can see hours of intense racing as riders on two wheels get up to speeds of more than 200 mph. FOX 7 Austin's Tierra Neubaum gets details from COO & partner of MotoAmerica Chuck Aksland.

"He said in (Indonesia) the impact was huge. I would have the same risk this weekend, in one year or three years," Marquez said, acknowledging the injured eye nerve "is one of my weak points."

Marquez has won the Grand Prix of the Americas seven times since 2013. The Circuit of the Americas is a Formula One track where the long straights and tight corners reward the pure horsepower of the Honda engines. In any other year, he would be the runaway favorite to win again.

"The approach cannot be the victory," Marquez said. "Now I'm just trying to regain the confidence."

Championship leader Aleix Espargaro of Aprilia Racing said he is glad to see Marquez back on the track. And he won't dismiss Marquez from victory or podium chances Sunday.

"Marc is one of the best in history, especially strong here in America," Espargaro said. "You still have to look at him. We're happy he's back. What happened to him is extremely difficult. You have to be very brave and have a strong mentality to overcome that."

The 32-year-old Espargaro has been a regular in MotoGP since 2014 but didn't earn his first victory until last week in Argentina in career start No. 200. "I feel more relaxed than ever in my career," Espargaro said. "I dreamed of my first victory and I achieved it, and now I know I can win.