Aside from winter storm damage, residents FOX 7 spoke to Saturday said any repairs at all have been hard to come by.

AUSTIN, Texas - As Texas endures the dead of summer, it’s easy to forget the winter storm that wreaked havoc six months prior.

But for residents of the Rosemont at Oak Valley Apartments, they have a constant reminder.

"Yesterday I was getting calls from them trying to figure out what day to move us," said resident Kecia Prince.

Prince is one of 41 residents being asked to leave temporarily due to the discovery of mold months later.

Right before the July 4th weekend, residents received a letter from the property management company stating their leases would be terminated on July 31 because of "natural disaster" or "catastrophe" referencing February’s deadly winter storms.

That notice was later rescinded, but residents were told the apartment was moving forward with temporary relocations.

Southeast Austin families will no longer be evicted from their homes

Dozens of residents flooded into the Rosemont at Oak Valley leasing office to demand answers after receiving eviction notices more than a week ago.

For Prince, she also dealt with flooding from the storm and said initial repairs to her unit were done poorly. They now have to be completely redone while she’s gone.

Aside from winter storm damage, residents FOX 7 spoke to Saturday said any repairs at all have been hard to come by.

"Some say that their stuff is not from the storm," said Prince. "It’s from previous damage and neglect, stuff that didn’t get fixed over and over."

That’s been the case for Linda Hernandez-Padilla, who lives up the road from Prince with her four grandchildren.

"I’ve been without the light in my kitchen for the past two years," she said. "I’ve had to repair some of the things myself or purchased stuff myself."

Under new criteria, she is now eligible to stay while they fix her unit. Originally, 87 units were asked to temporarily vacate. After reevaluation, 46 of those were told they no longer had to leave. 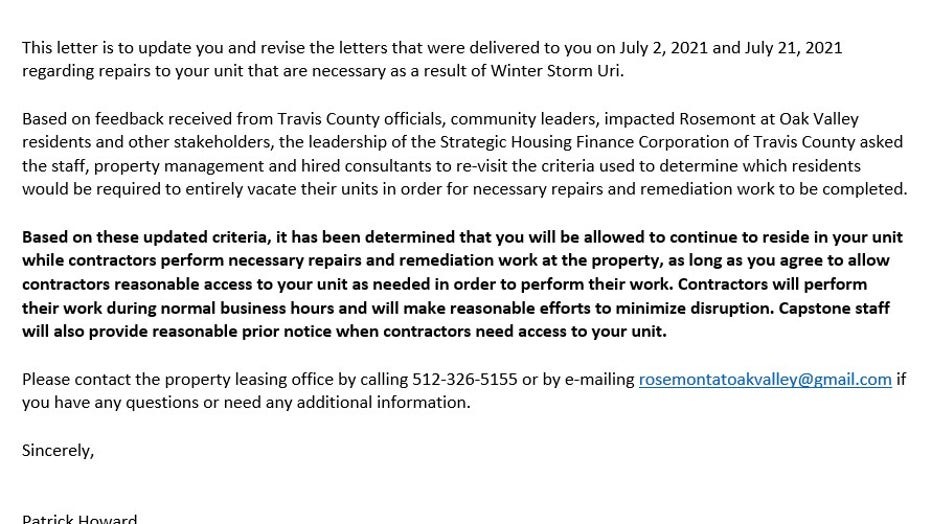 Originally, 87 units were asked to temporarily vacate. After reevaluation, 46 of those were told they no longer had to leave.

However, for her and her family, the option to stay is not ideal.

"They’re like, ‘Grandma, how are we going to stay with construction and stuff?’" she said.

According to Patrick Howard, executive vice president of SHFC and executive director of HATC, they will also pay for storage units and a moving company.

"Three families are scheduled to move today and, subsequently, three families each day until [about] the tenth of August," said Howard. "We have every intention of making sure that folks are being accommodated in a way that’s appropriate and that would at least meet their minimum standards in terms of how they expect to live for a temporary period of time."

Howard said they are now trying to make good on what they did not consider when the initial plan was first laid out and doing their best to clear up any confusion.

For example, some residents were under the impression that they had to be out by Saturday, but according to Howard, Saturday is simply when the moving process began.

87 families forced out of affordable housing units in South Austin

Residents were given less than thirty days to pack up and leave and are being told other affordable housing communities are at capacity.

"That’s what he said, but that’s not what the office is telling people," said Prince. "They’re not on the same page."

For residents FOX 7 spoke to, that mixed messaging has added to the stress and confusion. It has also motivated Prince to help lead a group that keeps the other residents informed. They’ve also come up with a list of demands that include having all necessary repairs to be completed - not just those that are winter-storm related.

"I’m here to fight for me and everybody that lives here," said Prince.