AUSTIN, Texas - Will Reichard kicked a 33-yard field goal with 10 seconds left, and Bryce Young and No. 1 Alabama overcame a stifling defensive effort by Texas to earn a hard-fought 20-19 victory Saturday.

Young was hit and harassed by the Texas defense most of the game, but the Heisman Trophy-winning quarterback put together a big fourth quarter.

He had a twisting, off-balance touchdown pass, and then a 20-yard scramble in the final minute to set up Reichard’s winning kick. Young easily dodged a blitzing defender, then had wide open field ahead of him to scamper.

"We know what it takes," Young said of the final drive that started at the Alabama 25 and moved across midfield in two plays. "We embrace that challenge. That’s where we want to be at."

Young’s clutch play rescued Alabama on an uncharacteristically sloppy day when the Crimson Tide (2-0) struggled with penalties and dropped passes and was forced into six consecutive punts in one stretch. Texas (1-1) stuffed Alabama on fourth-and-inches late to set up a go-ahead field goal by Bert Auburn with 1:39 remaining. 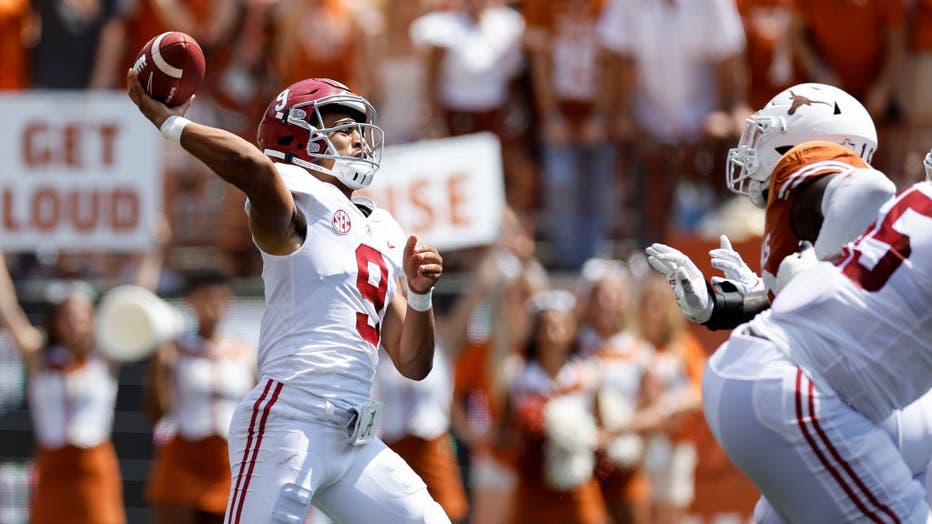 AUSTIN, TEXAS - SEPTEMBER 10: Bryce Young #9 of the Alabama Crimson Tide throws a pass under pressure by Ovie Oghoufo #18 of the Texas Longhorns in the third quarter at Darrell K Royal-Texas Memorial Stadium on September 10, 2022 in Austin, Texas. (P

"I think at the end of the day he (Young) did a great job," Alabama coach Nick Saban said. "When his best was needed, he was really good. And that’s what we needed."

Young also spoiled what could have been a program-defining victory for Texas and second-year coach Steve Sarkisian. Longhorns quarterback Quinn Ewers was knocked out with a shoulder injury at the end of the first quarter.

The steady hand of backup Hudson Card and an inspired defense helped Texas build a 16-10 lead early in the fourth, and then drive for the lead again on Auburn’s fourth field goal of the day.

Young was 27-of-39 passing for 213 yards with the scrambling TD throw to Jahmyr Gibbs that gave Alabama a 17-16 lead. Jase McLellan had an 81-yard touchdown run for Alabama in the first quarter.

"Nobody gave us a chance in this game. ... None of you, no one in the national media," Sarkisian said. "We played like a team that believed it could win the game."

Alabama: The Tide was all out of sorts. Eleven first-half penalties and dropped passes showed a level of sloppy play seldom seen by Saban teams. Last season’s Bronco Nagurski Award winner Will Anderson struggled to make plays against an inexperience Texas offensive line.

"It’s all about discipline, making the right choices and decisions, whether it’s post-snap, it doesn’t matter. We’ve got to play better, there’s no doubt about that," Saban said.

Texas: The Longhorns let a huge win get away. Now they also have questions at quarterback if Ewers is out for an extended period. He was electric early against the Tide and had already passed for 134 yards in the first quarter before he was hurt when linebacker Dallas Turner drove him into the ground. 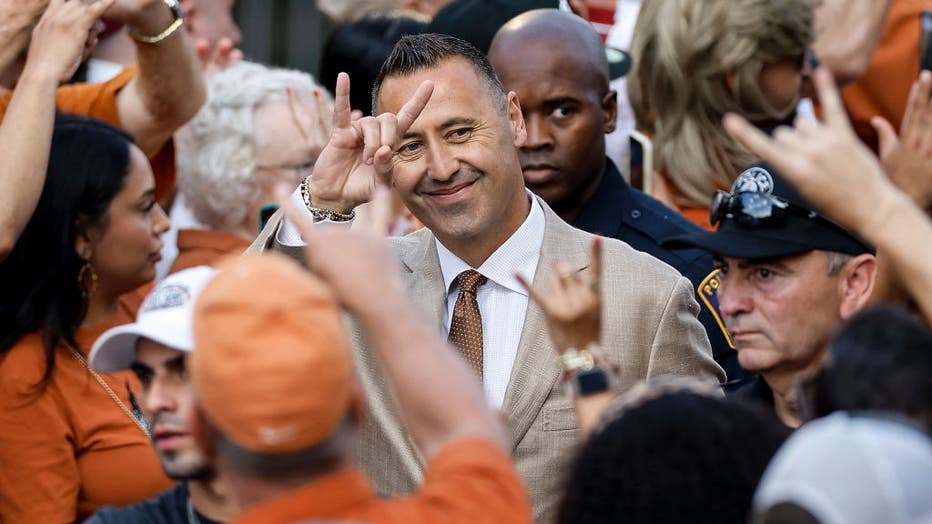 AUSTIN, TEXAS - SEPTEMBER 10: Head coach Steve Sarkisian of the Texas Longhorns arrives at the stadium before the game against the Alabama Crimson Tide at Darrell K Royal-Texas Memorial Stadium on September 10, 2022 in Austin, Texas. (Photo by Tim Wa

This could be one of those rare situations where the top-ranked team gets penalized for not playing well in a win, while the loser earns respect for nearly stealing a victory in what was expected to be a blowout. If voters weren’t impressed by Alabama, the Tide could drop behind No. 2 Georgia. Texas, unranked but receiving votes, may have been impressive enough to sneak into the bottom of the rankings.

Texas, which is scheduled to join the Southeastern Conference ahead of the 2025 season, drew a record crowd of 105,213 to Darrell K Royal-Texas Memorial Stadium. Anderson was impressed by a crowd that hampered Alabama signal calls at the line of scrimmage all game.

"This is probably like the loudest environment I’ve played in. the hardest game, since I’ve been in college football," Anderson said. "Super loud, a lot of energy."

Texas got what initially looked like a sack and a safety that would have given the Longhorns a 12-10 lead and the ball early in the third quarter. Even the Alabama kickoff team was gathered on the field. But the game officials, who at first threw a flag for targeting, waived that off and the safety and Alabama was allowed to punt instead.