DALLAS - Marcus Carr and seventh-ranked Texas are playing through the lingering uncertainty surrounding the program following the suspension of coach Chris Beard.

Carr scored 15 of his 17 points after halftime and the Longhorns beat Stanford 72-62 on Sunday in their second game since Beard was suspended at the start of the week following his arrest on a felony domestic violence charge.

"We love coach Beard ... every day in that locker room over there, myself included, we’re all family," Longhorns acting head coach Rodney Terry said. "But you control what you can control right now at this time, and that’s putting these guys in the best position to be successful and, you know, keeping them having a great competitive experience."

University officials are allowing only Terry to speak on behalf of the team. Players again were not made available for postgame interviews.

Carr sparked an eight-point frenzy in a 48-second span early in the second half that put the Longhorns (9-1) ahead to stay, and he later ended their long shooting drought at the home of the NBA’s Dallas Mavericks. Timmy Allen and Si’Jabari Rice each had 15 points for Texas. 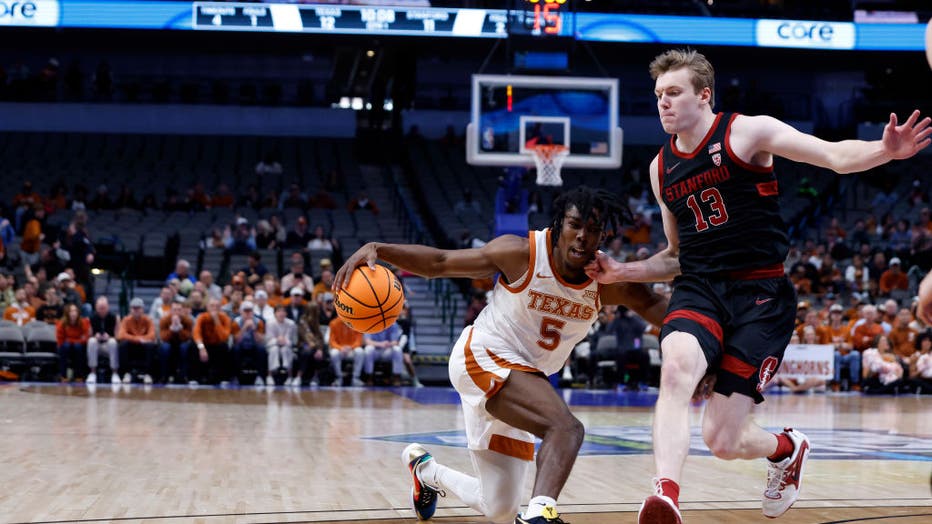 It was the second game for Texas since Beard was arrested and spent nearly 11 hours in jail Monday. The woman who called police to his home said he choked, bit and hit her during an argument. Beard’s attorney has said the coach is innocent.

Texas officials suspended Beard indefinitely without pay, elevated Terry to acting head coach and have declined to comment on Beard’s case since. The only mention of Beard in the team’s game notes was on the third page, a copy of the university’s one-paragraph statement from Monday announcing the suspension.

Beard is two seasons into a guaranteed seven-year contract that pays him more than $5 million per year.

The Longhorns started slow against Stanford, just like they did Monday night when they trailed at halftime and needed overtime to beat Rice 87-81. They didn’t need as long to get on track this time, though they still had some late struggles.

"Right now we’re defending our culture in terms of how hard we play, what the standards are every, every day," Terry said.

Terry, a former head coach at Fresno State and UTEP, is in his second stint as a Longhorns assistant. Asked if he knew anything more definitive about his status moving forward, he said he did not.

Carr made a second-chance, tiebreaking 3-pointer after Allen had a layup blocked to put Texas up 34-31 right after halftime. He then had a defensive rebound that led to a 3 by Tyrese Hunter before his steal and pass ahead to Dylan Disu for a one-handed slam.

Stanford coach Jerod Haase said he saw nothing different about the Longhorns without Beard on their sideline.

"I think we’ve had 48 practices or something like that and, you know, 48 practices and all the games teams tend to be kind of ingrained in what they do and how they play," Haase said. "So I thought it’s pretty seamless. I didn’t see a lot of change from film to what they did out there."

Stanford: The Cardinal have struggled despite have so much experience — they returned eight of their top nine rotation players from last season. They are 0-2 in Pac-12 play and 1-5 overall against teams from major conferences after losing to Texas for the second year in a row in the Pac-12 Coast To Coast Challenge. The Longhorns won 60-53 last December in Las Vegas.

Texas: The Longhorns have been ranked as high as No. 2 in the AP poll this season, but they are trying now to get their feet back under them after a difficult week.

Texas is home against Louisiana-Lafayette on Wednesday night.