Paxton, who is within reach of winning the GOP nomination to seek a third term Tuesday, has been under state felony indictment since 2015 on securities fraud charges and is separately being investigated by the FBI after his top deputies accused him of corruption.

He faces Texas Land Commissioner George P. Bush, who forced a runoff in March but finished 20 percentage points behind Paxton in a four-way primary.

"This is the chief law enforcement officer of the state of Texas and it’s a source of embarrassment to me that that has been unresolved," Cornyn told reporters. "As a former attorney general myself, I’m embarrassed by what we’re having to deal with." 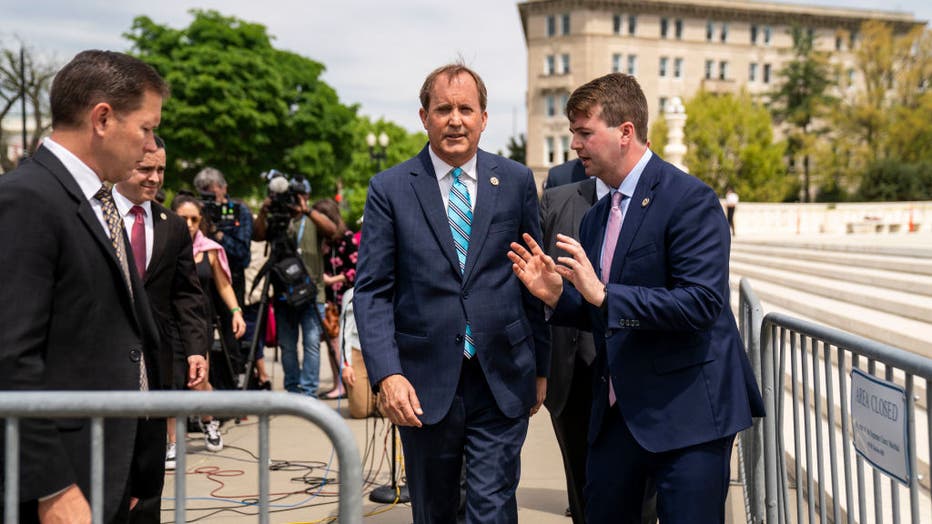 WASHINGTON, DC - April 26: Texas Attorney General Ken Paxton leaves a news conference in front of the Supreme Court of the United States on Tuesday, April 26, 2022 in Washington, DC. The Supreme Court will hear oral arguments Tuesday in the Biden v.

Paxton responded that Cornyn "represents the Bush wing of the GOP" and that he was "not shocked" by the senator’s comments. "I’ll never relate to Senator Cornyn’s ability to compromise with radical Senate Democrats in DC," Paxton wrote on Twitter.

The remarks by Cornyn, a former member of the Senate’s Republican leadership, amount to one of the most stinging public rebukes of Paxton by a high-ranking member of his party over a growing trail of legal problems. Other Texas Republicans, including Gov. Greg Abbott, have previously expressed concern about the allegations against Paxton but have generally stopped short of directly criticizing him.

Cornyn’s comments come as the Texas bar association considers whether to punish Paxton over his attempts to baselessly overturn the 2020 presidential election. The bar earlier this month brought a disciplinary proceeding against Paxton’s second-in-command and the attorney general has said he expects the regulator to sue him over his effort to overturn Joe Biden’s presidential victory.

Paxton has pleaded not guilty to the securities fraud charges and has broadly denied accusations by his former staff that he used his office to help a wealthy donor.