SAN ANTONIO - Michael Penix, Jr. threw for 287 yards and two touchdowns and No. 12 Washington held off No. 21 Texas 27-20 on Thursday night in the Valero Alamo Bowl.

Texas scored 10 late points, pulling within seven on Bert Auburn’s 26-yard field goal with 1:40 remaining, then failed on an onside kick try. The Longhorns (8-5) stopped the Huskies (11-2) on the ensuing possession and took over on their own 16 with 32 seconds and got to the Washington 40 on the final play of the game.

"Another big night for the ’22 Huskies," Washington coach Kalen DeBoer said. "It starts with these guys up here (Penix, Wayne Taulapapa, Bralen Trice). They all played huge huge roles in what happened tonight. It was a culmination of everything we’ve worked on. The things we’ve tried to improve, especially in the latter half of the season." 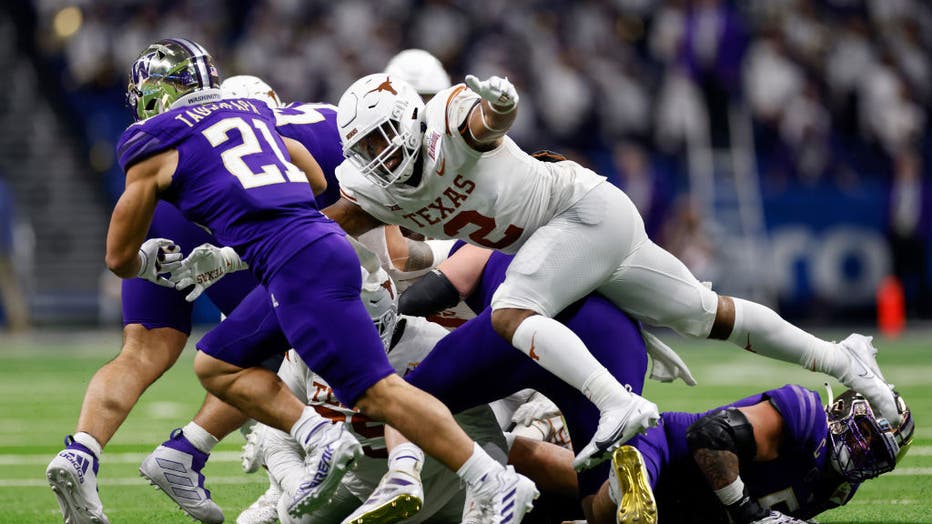 SAN ANTONIO, TEXAS - DECEMBER 29: Wayne Taulapapa #21 of the Washington Huskies runs the ball while defended by Diamonte Tucker-Dorsey #2 of the Texas Longhorns in the second half during the Valero Alamo Bowl at Alamodome on December 29, 2022 in San

Penix finished the season with 4,641 yards passing to break the 20-year-old Washington season mark of 4,458 set by Cody Pickett.

And while Washington relied heavily on the pass game, its had success on the ground with 158 yards, including a 46-yard option TD run by Wayne Taulapapa in the first quarter.

"We were just trying to feel out the game, feel out how the adjusted and reacted to our pass option," Penix said. "I was like, `OK, I’m going to hand off this time and see how they adjust to it. I knew handing it off to Wayne, we had a good box, and he’ll make anything happen."

Penix led back-to-back scoring drives of 75 and 90 yards in the second half to stretch the Huskies’ lead to 17. He was 32 of 55, completed passes to eight receivers, and connected with Taj Davis and Jalen McMillan for scores.

"They did a nice job of extending drives," Texas coach Steve Sarkisian said. "They had three straight drives of 16, 13 and 14 plays that resulted in 17 points. But in the end I was proud of our guys. They continued to battle; gave us a chance at the end. We just didn’t make enough plays."

Texas was without star running back Bijon Robinson, and rushed for just 51 yards. Robinson, who led the Longhorns with 1,580 yards and 18 TDs, skipped the game to prepare for the NFL draft.

Sarkisian said the game plan was to throw the ball extensively.

Texas had cut a 10-point halftime deficit to 13-10 on 34-yard pass play from Quinn Ewers to Jonathon Brooks on the opening possession of the second half. Ewers was 31 of 47 for 369 yards.

"After that first drive (of the second half), we got rolling," Ewers said. "It’s always good to get that first touchdown. It’s awesome to have that first drive to score coming out of the locker room. And with our offense, once we get going it’s hard to stop us."

Washington, which lost out on tiebreakers for a spot in the Pac-12 championship game after a 7-2 league mark, finished on a seven-game winning streak with its second straight bowl victory.

Texas was in its first bowl game under second-year coach Sarkisian.

In addition to Robinson, Texas senior running back Roschon Johnson and senior linebacker DeMarvion Overshown opted out to prepare for the NFL draft. No Washington players opted out.

REDEMPTION AT THE ALAMO

The Huskies are 1-1 in the Alamo Bowl. In 2011, Washington — coached by current Texas coach Sarkisian — lost to Baylor 67-56 in the highest-scoring edition of the game.

HOME AWAY FROM HOME

Texas, which traveled 90 miles from Austin, saw its winning streak in San Antonio come to an end. The Longhorns, playing in their third Alamo Bowl in the last four years, beat Colorado 55-23 in 2020 and Utah 38-10 in 2019.