Austin voters to decide on Project Connect this Election Day

Austin voters will decide on Proposition A in the November election, saying either yes or no to Project Connect, a potential solution for traffic, mobility, and climate change.

"With the passage of Proposition A, voters have given the green light to a once-in-a-generation opportunity to revolutionize our transportation infrastructure and provide people in our community with a safe, reliable way to get around," said Austin City Manager Spencer Cronk. "Project Connect will be better for our residents' health, the environment, our safety, and our economic prosperity. Now, in partnership with the community, we are ready to begin the hard work to make this vision a reality."

For too long Austin's rapidly growing population has outpaced transportation options, leading to clogged roads, angry commuters, and a handful of failed mobility propositions. Austin City Council says moving forward with a new plan, known as Project Connect or Prop A, is the best solution to the city's traffic woes.

Capital Metro is one step closer to expanding its transit services for the Austin area.

However, voters would need to approve a tax hike at a time when people are already pinching pennies in order for construction on the transit plan to hit the gas.

FOX 7 Discussion: Wade Cooper on pros of Proposition A

Austin voters will decide on Proposition A in the November election, saying either yes or no to Project Connect, a potential solution for traffic, mobility, and climate change. Cap Metro board chair Wade Cooper joins Mike Warren on FOX 7 Austin to talk about the benefits of Prop A.

CapMetro says the Project Connect new rail system would connect North and South Austin, provide a direct link to the airport, through downtown and to South Congress, while extending to East Austin's Colony Park.

The light rail was recommended as the primary mode of transit for the proposed Orange, Blue, and Gold lines and also envisions light rail going underground downtown. The light rail would consist of high-capacity transit vehicles accommodating up to four times more passengers per trip than a standard bus, says CapMetro.

The 21-mile Orange Line connects North and South Austin with 22 stations running from TechRidge to Slaughter along the North Lamar/Guadalupe corridor, connecting the UT campus and downtown before crossing Lady Bird Lake and traveling along South Congress to Slaughter Lane, says CapMetro.

The push for mass transit and trains in Austin has been a decades-long fight, but what exactly are people voting on this November? UT public policy expert Steven Pedigo joins Rebecca Thomas on FOX 7 Austin to analyze Proposition A and the laws surrounding it.

The 15-mile Blue Line light rail would connect 20 stations, running from downtown to the Airport providing service along East Riverside Drive across Lady Bird Lake to the Convention Center and west on 4th Street to Republic Square, then along the Orange Line's path to US 183 and North Lamar.

The plan also calls for a Downtown Transit Tunnel to separate the light rail from street traffic, connecting at underground stations at Republic Square and other downtown locations. These stations are planned to include such amenities as retail, restaurants, and a transit store and service center, says CapMetro. 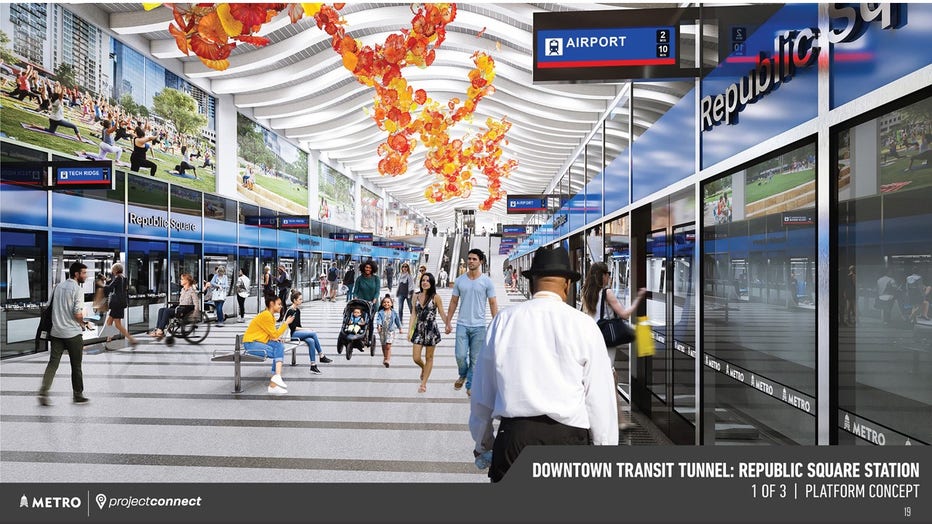 Project Connect also calls for improvements to the Red Line, adding stops at the Domain and the new Austin FC stadium at McKalla Place. In addition to expanding the Red Line, the plan proposes a 27-mile Green Line commuter rail from downtown to eastern Travis County and into Bastrop County, connecting Manor with downtown Austin. CapMetro says with new transit hubs and Park & Rides, the Green Line would operate along the existing freight line between Austin and Manor, with a possible extension to Elgin.

Also in the Project Connect plan is what CapMetro calls "Bus Rapid Transit," or high-capacity transit vehicles operating on dedicated transit-only lanes that operate free from street traffic. CapMetro says the initial investment would build the Gold Line first as a MetroRapid bus service. The system plan eventually envisions the Gold Line as a 9.5-mile light rail connecting 15 stations from ACC's Highland campus along Airport Blvd. and Red River into downtown, across the river, and down South Congress. 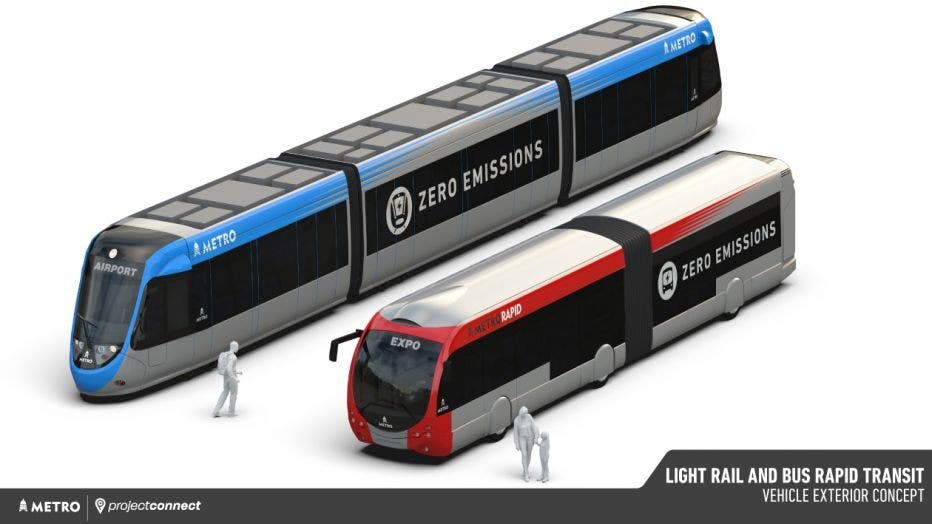 In addition to the Gold Line, CapMetro is looking at adding three new MetroRapid routes to provide frequent service with a limited number of stops. New corridors would include the Expo Center from East Austin to UT and downtown; Pleasant Valley from Mueller to the Goodnight Ranch Park & Ride; and Burnet from The Domain to Menchaca and Oak Hill.

Project Connect's more than $7 billion price tag will come at a cost to taxpayers, and many in Austin are concerned about Proposition A. Travis County Commission Gerald Daugherty and Roger Falk with Our Mobility, Our Future join Rebecca Thomas on FOX 7 Austin to talk about the cons of Proposition A.

Federal funding is expected to cover about 45 percent of the cost with property tax revenue covering the other $3.55 billion-plus ongoing operations and maintenance. In July, Cap Metro's Board and City Council unanimously adopted resolutions to support an initial investment of $7.1 billion, including $300 million total for transit-related anti-displacement strategies.

On Election Day, voters will decide whether a tax increase will pay for the project at a rate that is 8.75 cents higher per 100 dollar valuation than the current tax rate. That's about a 300 dollar increase in taxes for the median homeowner.

The tax rate increase is only for the City of Austin property tax rate. Home and business owners also have to pay property taxes for  Austin ISD, Travis County, Austin Community College, and Central Health.

Proposition A could decide the future of transportation in Austin. Mayor Steve Adler joins Mike Warren on FOX 7 Austin to talk about the consequences of voters not approving Prop A.

City leaders tout the plan as a way to create jobs, reduce emissions, and provide access to school, work, and the airport. The 27-mile light rail system, expanded electric bus service, and added park and ride facilities could take decades to complete, but once finished will connect east to west and north to south.

RELATED: CapMetro's Project Connect at the center of debate

However, local business owners have expressed concerns about the property tax increase, especially during a pandemic when many of them were closed or operated at reduced capacities for months this year.

Supporters of Prop A have consistently said the tax increase&nbsp;for a typical homeowner on their annual tax bill&nbsp;is going to be around $300. But for small business owners, the increase is much more significant.

Here is the list of some notable names and tax hike estimates, according to Travis County Commissioner Gerald Daugherty:

One of the most talked-about items on the ballot here in Austin is Prop A: Project Connect. Business owners say the $7.1 billion plan could have a dramatic effect on them. Jennifer Stevens, President and CEO of JHL Company joined Good Day Austin’s Casey Claiborne Saturday morning to talk about it.

Some groups are advocating for Project Connect, saying that the plan is a way to bridge the social-economic gap between East and West Austin, providing well-paying jobs along with connectivity.

The fate of the $7.1 billion project is in the hands of the voters now.