The billboard marks at least the second time California Gov. Gavin Newsom has paid for advertising in Texas concerning abortion.

The billboard, which is up just south of Stassney Lane in South Austin, features a woman sitting with her arms crossed over her knees, looking at the words "Need an abortion? California is ready to help."

The billboard also features California's abortion resources website with an interactive tool on how to receive a legal abortion in California even if you are not a resident.

A Bible quote is also on the billboard saying "Love your neighbor as yourself. There is no greater commitment than these." 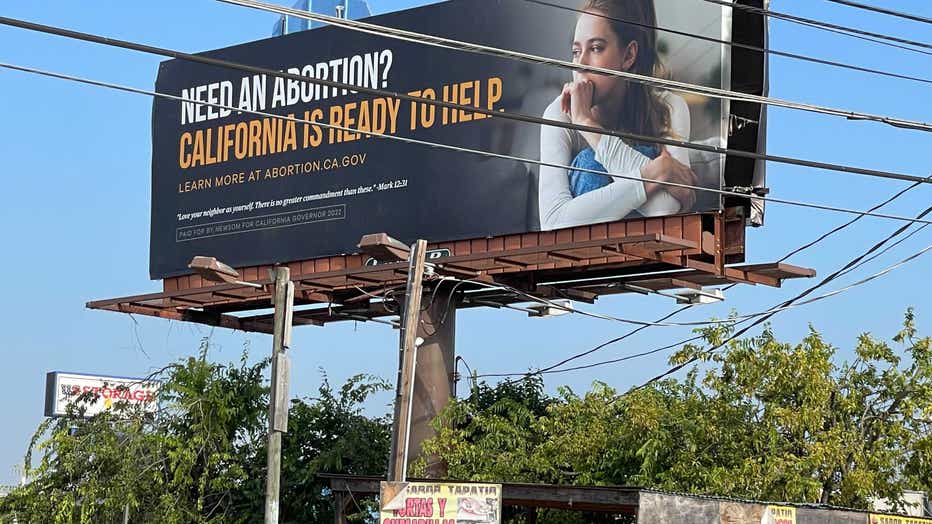 "It includes information on your right to an abortion and information if you’re traveling to California from another state that has restricted your reproductive care. The site does not track you or your personal information. Abortion remains legal and protected in California. We have your back," said Governor Newsom.

Texas is not the only state who will now see this kind of billboard around. There are a total of 18 located in seven different anti-abortion states.

"This website came as a result of this conversation and here we are, a year later, seeing it and having it come to fruition. So, it is an absolutely critical next step in California being a reproductive freedom state," said Gilda Gonzalez, CEO of Planned Parenthood Northern CA.

However, not everyone sees the billboard as a good thing.

"It's concerning to see California and its governor really engage in this type of behavior," said Jonathan Saenz, President and attorney for Texas Values.

Texas Values is a pro-life organization. Saenz believes the governor of California knows exactly what he is doing with these types of billboards which are an obvious target against abortion ban that went into effect in Texas after the supreme court overturned Roe v Wade.

"I think a lot of what you see from the governor of California taking aim at Texas is their frustration that a lot of people from California have moved to texas for a better life, and so this is a desperate act on their behalf to try to somehow convince people to come back to their state," said Saenz.

There is no information on how long the billboard will be up for.

The billboard, which is up just south of Stassney Lane in South Austin, features a woman sitting with her arms crossed over her knees, looking at the words "Need an abortion? California is ready to help."

The billboard states it is paid for by Gov. Newsom's re-election campaign, marking at least the second time the Democratic governor has paid for advertising in Texas concerning abortion. In July, Newsom targeted Texas Gov. Greg Abbott with full-page ads placed in three Texas newspapers, including the Austin-American Statesman.

The ads, which also ran in the Houston Chronicle and the El Paso Times, feature a modified quote from Abbott about Senate Bill 8, which bans abortion in Texas after six weeks. The quote is modified to criticize Abbott's response to gun violence in Texas following the mass shooting in Uvalde that killed 19 students and two teachers in May.

Newsom also slammed Abbott on social media regarding abortion after Abbott posted on Twitter in Austin ripping California's plan to require all new cars, trucks, and SUVs to run on electricity or hydrogen by 2035.

Performing an abortion is now a felony after the state’s trigger law, which has only narrow exceptions to save the life of a pregnant patient, went into effect in August. The law was "triggered" when the U.S. Supreme Court issued its judgment in Dobbs v. Jackson, the case that overturned Roe v. Wade and allowed states to set their own laws about abortion.

The trigger law criminalizes performing an abortion from the moment of fertilization unless the pregnant patient is facing "a life-threatening physical condition aggravated by, caused by, or arising from a pregnancy." The statute specifically prohibits prosecuting a pregnant patient who undergoes an abortion.

Violations of the law are punishable by up to life in prison. The statute also says that the Attorney General "shall" seek a civil penalty of not less than $100,000, plus attorney’s fees.